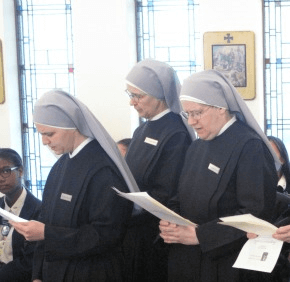 At an Oct. 15 Mass celebrated by Archbishop William E. Lori in their newly-renovated chapel at St. Martin’s Home for the Aged

CATONSVILLE – “Gee, I never thought I’d live so long to see something so beautiful.”

That, according to Little Sister of the Poor Baltimore Provincial Superior Loraine Marie Maguire, was the reaction of one member of her religious community to the completed renovation of the chapel at St. Martin’s Home for the Aged.

Baltimore Archbishop William E. Lori blessed the new chapel and those inside Oct. 15, including Little Sisters of the Baltimore Province, staff and residents of St. Martin’s and those who have donated to the three-phase, multi-year renovation project that includes the chapel.

The open, uncluttered chapel, though slightly smaller than the original, features arched ceilings and light colors in a bright, yet contemplative, space.

The chapel is part of the second phase of the St. Martin’s renovation, a $25 million project for which the Little Sisters have raised $15 million so far. The project has included renovations and expansions to St. Martin’s independent living, assisted living and skilled nursing facilities, as well as to the sisters’ convent. Yet to be completed is a “main street” area for residents to socialize, which will include a beauty parlor, barbershop, café and gift shop.

About a dozen priests of the Archdiocese of Baltimore concelebrated Mass with the archbishop. Cardinal William H. Keeler, archbishop emeritus of Baltimore, attended.

“The chapel is the ultimate engine that makes St. Martin’s Home what St. Jeanne Jugan wanted it to be and what it really is,” Archbishop Lori said in his homily, referring to the Little Sisters’ founder. “It is a place of faith; it is a place of love; it is a place of hospitality.”

He lauded the sisters’ care for the elderly poor, which he said is always undertaken with a smile, with a readiness to listen, and with “the beautifully competent and comprehensive care that the sisters and their coworkers provide.”
The archbishop noted that a renovation improves the outward appearance of a building, but it also “strengthens and improves those systems we don’t normally see,” such as plumbing, electricity and heating.

In the same way, he said, God renovates us, “even in our advancing years, even in the hidden depths of our souls.”

“I know this,” Archbishop Lori added, “not only because I’m a priest and a bishop, but because my mom and dad continue to teach me every day.”

His parents, he said, are in a nursing facility in Indiana.

“The first thing they tell me is, ‘We went to Mass today,’” the archbishop relayed, noting that on the occasions when he celebrates Mass at their facility, his mother always reminds him to “speak up, so everyone will hear you.’”

“He has been true blue throughout this project,” Sister Loraine Marie said, also thanking CAM Construction as well as architects and designers Gaudreau Inc. and Rohrer Studio.

“It took our breath away when we walked in (the chapel) the other night,” she said.

She also expressed gratitude for the completion of the new postulate – where aspiring Little Sisters of the Poor will live and learn before taking their first vows – on the grounds.

“In our mother’s heart was constantly the petition to pray for vocations to religious life,” Sister Loraine Marie said. “It gives us great happiness now to open a house of formation. Thank you for making that possible.”

Little Sister of the Poor Mother Superior Joseph Caroline Beutler, who leads the sisters at St. Martin’s Home, said the renovation was “worth the wait.”

“Our hopes and dreams today become a beautiful reality,” she said.

Lisa Stromberg, a parishioner of the Cathedral of Mary Our Queen in Homeland, was responsible with her husband, William, for funding the stained glass in the St. Martin’s chapel, as well as other contributions.

“We feel as though the Little Sisters really cherish the treasures and are great stewards of all the gifts given to them,” she said, adding that she is awed by the manner in which they carry out their mission.

“They do an unbelievably caring and holy job of caring for all the residents here,” Stromberg said. “It really is God’s work in action.”

While the liturgy focused on the Little Sisters’ mission, Archbishop Lori acknowledged their ancillary battle with the federal government for the freedom to not participate in providing employees with contraception, sterilization and abortifacient drugs, all of which are against Catholic teaching.

The archbishop thanked the sisters “for their staunch, their loving and their courageous defense of religious liberty in the United States.”