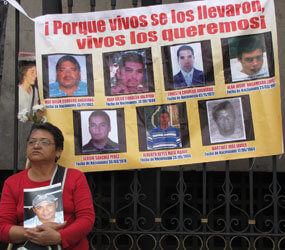 MEXICO CITY – Ricardo Salazar Sanchez boarded a northbound bus in the central state of Guanajuato with 22 fellow residents for a journey to the U.S.-Mexico border – and a subsequent attempt at crossing into Texas, where potential construction jobs awaited.

What happened to them remains a mystery. In April, family members began suspecting the men ended up in the mass graves discovered on a ranch near the U.S. border; authorities found the remains of passengers pulled, at gunpoint, from northbound buses by the Mexican drug gang Los Zetas.

“We started to worry because on the news they said the bodies … hadn’t been there very long,” said Minerva Hernandez Guzman, Salazar’s wife.

Salazar’s body – and those of his 22 travel companions – still have not been found or identified, even though four representatives of the men’s families hitchhiked to the border city of Matamoros in a desperate search for information.

Salazar is just one of the hundreds who have been abducted or simply disappeared under mysterious circumstances since the Mexican government launched a crackdown on drug cartels and organized crime in December 2006.

And the relatives’ desperate searches are common as the assailants leave few clues and almost never demand ransom payments. Making searches even more desperate are the attitudes of state and federal authorities, whom victims and their advocates say show scant interest in missing persons cases or some who assume the abducted individuals were somehow mixed up in illegal activities.

“They’re not searching so we have to do it ourselves,” said Hernandez, who came to Mexico City in early August to press the attorney general’s office for answers and a more diligent investigation.

Another group of families supported by the Catholic Diocese of Saltillo voiced similar frustrations during a meeting in Mexico City with Attorney General Marisela Morales.

“Inside of this dynamic of violence and death, unattended by (the government), the victims of forced disappearances remain trapped,” said Bishop Raul Vera Lopez of Saltillo during the July 29 meeting.

The government’s drug-war policies, Bishop Vera added, “have abandoned and denied at all cost the carrying out of judicial activities.”

The phenomenon of forced disappearances dates back decades in Mexico, where student activists and suspected rebels were abducted by the military during the Dirty War of the 1970s.

Blanca Martinez, director of the diocesan Fray Juan de Larios Human Rights Center in Saltillo, says the disappearances surged again with the crackdown on organized crime – especially in northern states such as Coahuila, where Saltillo is located.

The disappearances became known as “levantones,” a word Martinez says many families find offensive because it carries connotations of organized crime involvement and cartels grabbing rivals to settle scores.

The cases her human rights center is handling vary, ranging from professionals and small-business owners being abducted to the sudden disappearance of six men selling paint door-to-door in the border city of Piedras Negras – and none appear to have connections to organized crime, she said.

The motives for the abductions are unknown since no ransoms are ever demanded, leaving families to speculate about the circumstances and motives.

“They say it was soldiers, but we don’t know,” said Gaudencia Hernandez, whose son, a veterinarian, was pulled from his truck two years ago in Torreon and was never heard from again.

Federal officials said in April that the victims pulled from the buses heading to the border were abducted as part of a forced recruitment campaign by organized crime, while other theories posit that cartels need skilled help for carrying out increasingly sophisticated crimes.

Father Alan Camargo, spokesman for the Diocese of Matamoros, which borders Brownsville, Texas, and contained the site of the mass graves, says stories of abductions have become common in his region.

“People tell us that in some small towns (and) ejidos (communal farms), that armed groups come by to grab young people in order to swell their ranks,” he said. “During Mass in some churches, they pray for the sick, those who have passed away and those who have disappeared.”

Hernandez and the families of the men who disappeared after boarding buses still hold out hope their loved ones are alive. Hope surged after the federal police rescued 68 kidnapped bus passengers April 21 in the border city of Reynosa, and some of the passengers’ clothing appeared similar to what the missing men were wearing.

But help in resolving the cases has been lacking. The Guanajuato state government once sent a psychologist, but Veronica Coronilla, whose husband is among the missing, said the families found her suggestions to move on and “forget” their loved ones offensive.

She recalled one person telling the psychologist, in reference to a missing loved one, “He’s not a chair or a piece of furniture you forget about.”