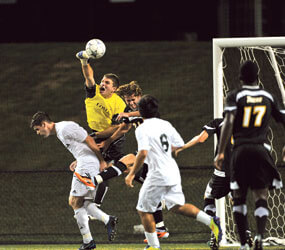 The men’s soccer team at Loyola University Maryland again recorded double-digit regular season wins in 2011. Much of that success was owed to fifth-year senior goalkeeper Kyle Wittman and sophomore forward Geaton Caltabiano, whose surnames should be familiar to local fans.

Wittman recorded all 10 regular season wins for the Greyhounds, earning a Metro Atlantic Athletic Conference-leading eight shutouts. Caltabiano was an instrumental part of the Greyhounds’ attack, leading the team in goals and points.

What makes their accomplishments even more special is the fact that both Loyola standouts are hometown products with deep ties to the soccer community in Baltimore.

Wittman, who attended Calvert Hall, has a great respect for the history of soccer in the area. His father, Scott, was a prominent women’s college coach and his uncle, Tim, was a standout for the local indoor soccer team, the Baltimore Blast.

“Growing up I was always going to a lot of soccer games,” Wittman said. “I remember being a ball boy on the sidelines for my dad’s women’s college games. When you get to watch them (his relatives) play and see how good they were and then they can watch you play, it’s special.”

Scott Wittman won a national championship as a coach and Tim Wittman won several indoor championships. It’s clear that Wittman understands and respects the history of the sport in the area.

“There’s a special love that Baltimore people have for soccer. It was very cool to be able to see the tradition here and then play at Calvert Hall and Loyola,” he said.

Wittman isn’t the only Baltimore native who performed at a high level for the Greyhounds, whose 10-6-2 season ended in the MAAC playoffs.

Caltabiano, who transferred to Loyola from George Mason University, provided the Hounds with seven goals, good enough to rank fourth in the MAAC and earn second-team all-MAAC honors. Caltabiano’s father, Nello, was part of the Loyola team that won the NCAA Division II championship in 1976.

“My dad is still best friends with all those guys from the team,” Caltabiano said. “It was some of the best times of his life. He would always take me to Loyola games when I was young. It’s really fun and exciting to be able to play in a Greyhounds’ uniform, knowing that my dad was a part of the same thing.”

The team’s reserves include sophomore midfielder Alex Bullington, another product of Calvert Hall and the grandson of the late Jim Bullington, who coached Loyola and Caltabiano’s father to their NCAA title 35 years ago.