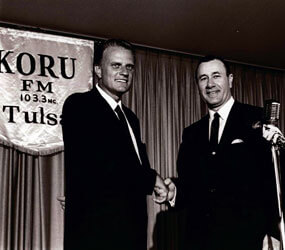 She said in a statement that his son Richard and daughter Roberta were at his side.

Roberts, who was semi-retired and living in New port Beach, fell Dec. 12 and suffered some broken bones and was hospitalized two days later. In 2006 he suffered a broken hip and in the 1990s recovered from two heart attacks.

Funeral services were to be private, but plans were pending for a public memorial service in Tulsa.

Bishop Edward J. Slattery of the Catholic Diocese of Tulsa said Roberts’ contributions were many.

“We should be grateful for them, especially for his having founded the university which bears his name. It is a place where so many men and women were educated in an academic setting that is both academically and spiritually strong,” he said.

The bishop said he never knew Roberts personally but became aware “of his great influence in this community” when he came to Tulsa to head the diocese 16 years ago.

“I offer my condolences to the family and friends of Oral Roberts, a true Christian leader, and I want to assure them of my continued prayers in their loss,” Bishop Slattery said in a Dec. 15 statement.

Born Granville Oral Roberts Jan. 24, 1918, in Pontotoc County, Okla., Roberts graduated from high school and went on to study two years at Oklahoma Baptist University in Shawnee, Okla., and two years at Phillips University in Enid, Okla. He ended his college studies without earning a degree.

In 1938 Roberts married Evelyn Lutman Fahnestock, whose father was a preacher, and he became a traveling faith healer. He had a pastoral ministry with the Pentecostal Holiness Church, but in 1947 he resigned from that church to start the Oral Roberts Evangelistic Association.

He began conducting evangelistic and faith healing crusades, mainly in the U.S. He spoke at hundreds of national and international meetings and conventions. Thousands of sick people would wait in line to stand before Roberts so he could pray for them.

Roberts began broadcasting his revivals on television in 1955, making him a pioneer televangelist.

A 1972 Time magazine profile of him said Roberts first made a name for himself with a large mobile tent “that sat 3,000 on metal folding chairs” where “he shouted at petitioners who did not respond to his healing.”

In 1963 he founded Oral Roberts University, stating he was obeying a command from God. It received its first students in 1965. As when the school was founded, students still sign an honor code pledging not to lie, steal, curse, drink or smoke.

Today the university has an enrollment of about 3,790 students, coming from most U.S. states and several foreign countries. Considered the largest charismatic Christian university in the world, it offers more than 60 undergraduate and graduate degrees.

Roberts was the university’s president until 1993 and remained a chancellor until his death.

In 1977 Roberts claimed to have had a vision from a 900-foot-tall Jesus, who told him to build the City of Faith Medical and Research Center, which opened in 1981. Its emphasis was on merging prayer and medicine. It closed in 1989.

Roberts fundraising was considered controversial. For example, during a 1987 fund drive, he told a television audience in a tearful, impassioned speech that unless he raised $8 million by that March, God would “call him home.” He raised $9.1 million.

In recent years Roberts remained involved in his evangelistic association as much as his health allowed, his spokeswoman said. His son currently serves as president. Another part of the organization is the Abundant Life Prayer Group, staffed by operators around the clock to take calls from people requesting prayer.

Roberts wrote more than 130 books. There are reportedly more than 8 million copies of his book “The Miracle of Seed Faith” in circulation.

“This book’s key principles – God is your source, sow your seed out of your need and expect a miracle harvest – formed a fundamental part of Roberts’ ministry and legacy,” according to his biography.

Roberts’ wife died in 2005 at age 88. The couple’s daughter Rebecca died in an airplane crash with her husband in 1997. Their eldest son, Ronald, committed suicide in 1982.

Besides son Richard and daughter Roberta and their spouses, Roberts is survived by 12 grandchildren and several great-grandchildren.