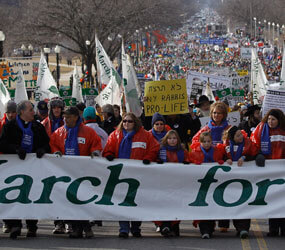 WASHINGTON – House Majority Leader Eric Cantor of Virginia said that after being out of power on Capitol Hill for the past couple of years, pro-life supporters in Congress and across the nation have been re-energized since last November’s elections brought in “the biggest pro-life freshman class in memory.”

“The tide has turned,” Cantor said in remarks at the March for Life rally on the National Mall, held Jan. 24 to mark the 38th anniversary of the Supreme Court’s Roe v. Wade decision legalizing abortion.

Jan. 22 was the official anniversary date, but the March for Life was organized for the following Monday to allow participants to visit their representatives on the Hill after a noon rally and a march along Constitution Avenue to the Supreme Court.

Members of the House pledge to institute a government-wide ban on the use of federal funds for abortion, said Cantor. He acknowledged that any pro-life legislation will face an uphill battle in the Senate and with President Barack Obama, a supporter of keeping abortion legal, but “the people’s House will stand unapologetically for life.”

After a performance by the Sounds of Liberty from Liberty University in Lynchburg, Va., and the playing of the national anthem, Nellie Gray welcomed the crowd, thanking them for gathering in “this beautiful weather.”

It was sunny but cold, hovering somewhere in the mid-20s, and marchers were bundled up against the cold.

Gray, now 85, is founder and president of the March for Life Education & Defense Fund – the group that organizes the march.

She called it “an evil” that more than 50 million abortions have been performed in the United States since Roe. “We come to our government … to bring the life principles to our government. … We ask our government to overturn Roe v. Wade now,” she told the crowd to loud applause.

There have been incremental steps in the past 38 years to try to address the fallout of what she called the “unconstitutional” court decision but nothing short of overturning Roe is acceptable, Gray said.

She said pro-life supporters had come to Washington to bring their message to Obama “with love, and we’re willing to work with you … as the president of all the people, including the preborn.”

She expressed disappointment with the statement the president issued Jan. 22, in which he noted the anniversary of Roe, “the Supreme Court decision that protects women’s health and reproductive freedom, and affirms a fundamental principle: that government should not intrude on private family matters. I am committed to protecting this constitutional right.”

Among others who spoke at the March for Life rally was Archbishop Joseph F. Naumann of Kansas City, Kan., a member of the bishops’ pro-life committee. He noted that many U.S. bishops were in the crowd with contingents from their dioceses and introduced the Catholic bishops sitting on the speakers’ platform, including Archbishop Henry J. Mansell of Hartford, Conn., and Bishops Samuel J. Aquila of Fargo, N.D., Bishop George V. Murry of Youngstown, Ohio, and Frank J. Dewane of Venice, Fla.