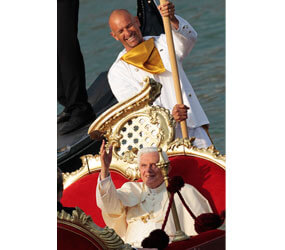 VENICE, Italy – Visiting Venice, the city of gondolas and canals, Pope Benedict XVI said Christians must make sure their lives as individuals and communities reflect the life-giving qualities of water and not the chaos and destruction it can bring.

“Water is an ambivalent symbol: of life, but also death; the populations struck by flooding and tsunamis know this,” the pope said May 8 at the end of a two-day visit to Aquileia and Venice in northern Italy.

Seated in a white gondola amid a colorful flotilla of all kinds of boats, Pope Benedict rode to a meeting with Venetian cultural, artistic, political and economic leaders.

He said Venetians know how fascinating water has made their city and, yet, how many difficulties it causes, particularly for the health and stability of the city.

Residents, he said, can choose to reflect either the beautiful or the problematic qualities of water in their relationships with others and in the way they organize their life together. Either they are “fluid” to the extent of being adrift and destructive, or they hold firm to their Christian heritage and become a source of life for all, he said.

Celebrating Mass for an estimated 300,000 people in a park in nearby Mestre that morning, Pope Benedict preached about the Gospel story of the disciples meeting the risen Jesus on the road of Emmaus. The story, he said, is about “conversion from desperation to hope, conversion from sadness to joy and, also, conversion to community life.”

“Sometimes when one speaks of conversion, people think only about the hard work, detachment and renunciation it involves. But Christian conversion is most of all a source of joy, hope and love,” as seen in the Gospel story when the disciples discover that Jesus truly rose from the dead and they return to Jerusalem to share the good news with the other disciples.

Too many Christians today tend to live like the disciples going toward Emmaus: They once knew Jesus or heard about him, but now they are “immersed in doubt, sadness and disappointment,” he said.

“The problem of evil, of pain and suffering, the problem of injustice and oppression, the fear of others, of foreigners and of those from far away who reach our lands and seem to threaten who we are, can lead Christians today to say: We had hoped that the Lord would free us from evil, pain, suffering, fear and injustice,” the pope said.

The only truly Christian response, he said, is to recognize that Christ has risen and continues to be present in his church, helping people respond to new challenges with hope and trust.

The pope began his weekend visit in Aquileia, an ancient Roman city at the extreme northeastern edge of Italy. Many of the town’s early Christians were martyred under the Emperor Diocletian in 303.

During an outdoor meeting with residents of the town, Pope Benedict said he wanted to visit Aquileia “to admire this rich and ancient tradition, but also to confirm you in the deep faith of your forefathers.”