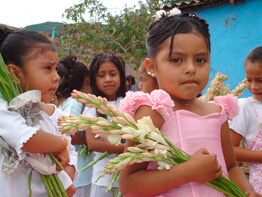 PONCITLAN, Mexico – Francisco Jacobo left his hometown in 1975, two years after a mudslide buried dozens of inhabitants as they slept. With the local economy in shambles, he headed north for Tijuana and eventually Los Angeles, where he found work in a water-bed factory and later a bakery.

But Jacobo never forgot about Mezcala de la Asuncion, a village of fishermen and gourd farmers on western Mexico’s Lake Chapala in Jalisco state, because his parents and several siblings stayed behind.
Economically, he now supports his retired father, sending a $100 monthly remittance. He also participates in fundraising and social activities organized by Club Mezcala, a five-year-old group of people living in the Los Angeles area that has ties with the town of 9,000 and works to fund infrastructure projects south of the border. Like hundreds of other “hijos ausentes,” or absent sons, he journeys back to his birthplace every August for the nine-day festival around the feast of the Assumption of the Blessed Virgin Mary.

The mid-August festival provides an opportunity for former Mezcala residents living in the United States to see how their remittances are being used and to once again immerse themselves in the village’s life and customs, including its devotion to Mary. Each of Mezcala’s nine barrios throws a party and takes turns decorating the parish with flowers and candles for the nightly Mass. For two nights after the festival ends, the “hijos ausentes” provide food, music and fireworks.

“It’s a tradition in the town … that people return year after year to their homeland,” said Jose Luis Claro, a seminary student and Mezcala resident who was working in the local parish during the recent festivities. The festival “is a pretext for returning.”

During the festivities, the population of Mezcala swells by an estimated 20 percent. Trucks with California license plates are commonly spotted. Those arriving often come with gifts for their families. A bus load of Club Mezcala members, including Jacobo, brought school supplies for local children. Last year they brought three computers for a public school.

Increasingly, the migrants are now funding bigger projects, including road repairs, drainage improvements and upgrades to the parish. Through a program called “Tres por Uno” (Three for One) the municipal, state and federal governments have matched the more than $120,000 raised by the club over the past five years.

“The idea is that they’re working to provide resources so that public-works projects happen in their community,” said Jose Luis Velazquez Contreras, the Mezcala-based liaison for Club Mezcala.
Through the Tres por Uno program, “large projects are being carried out,” he added.

In a sign of how important remittances and fundraising in the United States have become for some Mexican towns, the mayor of Poncitlan, a municipality that includes Mezcala, recently traveled to California with the Jalisco governor in an effort to court the leaders of some 120 clubs whose members come from the state.

The clubs’ fundraising methods can be somewhat modest in scope, but they add up.
“Many people participate … (and give) maybe $10 or $20 every 15 days,” Jacobo explained. “In the club, we cooperate in order to bring benefits to the town.”

Even though a desire to see Mezcala improve and the chance to visit family motivate the return of many “hijos ausentes,” the patron-saint festivities are still the biggest reason for coming home, Claro said.

“Those that left many years ago … the majority of them return to give thanks to the Virgin,” he explained. “They love her for the event that marked their lives.”

A plaque outside Assumption Parish notes the two events that changed Mezcala: July 8, 1973, the date of the mudslide, and July 19, 1973, when an out-of-town “fanatic” promoting another faith attacked the image of Our Lady of the Assumption with a machete, claiming that she failed to protect the town from disaster.

But instead of shaking the villagers’ faith, the community’s devotion to Our Lady of the Assumption grew deeper.