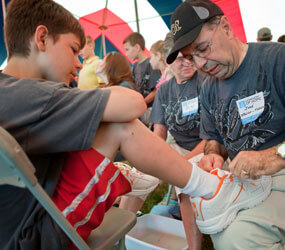 From haircuts to new shoes to funds for electricity and rent, the poor of Frederick County received comfort and support June 18 as they participated in Convoy of Hope at the Frederick County Fairgrounds.

In an intense effort galvanized by faith communities, including Catholic parishes, some 5,000 low-income visitors received assistance, and a 48-hour fast was held, with proceeds benefitting nonprofits subject to government budget cuts.

This was the first time Convoy of Hope, a national organization, held an event in Frederick. It was coordinated locally by Matt Thompson, outreach pastor at Calvary Assembly in Frederick.

“The role of the faith community is to reach out to those who want to find Christ the Lord in whatever way we can offer,” said Deacon Jim Barth of St. Timothy of Walkersville, who spent the day volunteering. “Whether I believe the government should provide these services is not my call; I only see that people here are willing to give, and nobody likes to see anyone go hungry.”

Deacon Barth was one of 1,900 volunteers from area churches at the event, which has been organized in communities around the country since 1994 and made its debut in Frederick after local religious leaders gathered last winter to discuss ways to join together to help the needy. The event’s purpose was to provide services such as job assistance, health screenings, food, family portraits, haircuts and even new shoes and socks.

Spokesman Michael Betteridge estimated that 100 health exams took place; 1,200 pairs of shoes were distributed, 400 haircuts were provided and seven bags of groceries were donated to each visitor.

“The people who organized this really have the right attitude,” said Cindy Hall of St. Peter the Apostle Parish in Libertytown, who volunteered with her son Ryan. “They said this event is not about us, the ones who are volunteering – it’s all about honoring and respecting those who are coming, to make them feel good, find out what they need, and help them.”

Hall worked at the shoe tent, also known as Samaritan’s Feet; where volunteers first prayed with and washed the feet of visitors, while volunteer runners fetched new shoes from a supply “store” that were then fitted on the recipients.

“That was a surprise,” said 10-year-old fifth grader Jada Pannell, who smiled shyly after Mary Hathaway washed her feet asked her about school and her life, then helped her fit in a bright new pair of tennis shoes. “That water was cold!”

Ginny and Bob Peters of St. Timothy Parish spent the day in grocery distribution and family portraits – a luxury that visitors said is not something they can usually afford.

“It’s been years since we’ve had a portrait done,” said couple Bill and Bonnie Custer of Frederick, who waited in line to eventually be photographed by Bob.

“I love to play with cameras,” said Bob, who is parish council president at St. Timothy. When he told organizers of his talent, he said he was delighted to end up in the photography tent.

Many Catholics also participated in the Frederick 48 Hours to Meet the Need Fast June 16-17, organized by the Religious Coalition for Emergency Human Needs, a Frederick ecumenical umbrella group that operates area emergency shelters and coordinates efforts of local nonprofit social services groups. The fast was organized by the coalition and local religious leaders in May as a response to cuts of $370,000 to the organizations by the Frederick County Commissioners.