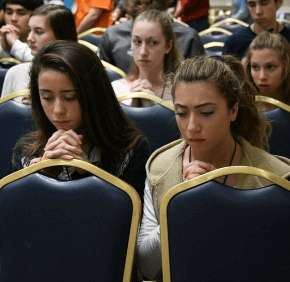 OCEAN CITY – It was Nov. 19, approximately 7:20 a.m., and the affable-yet-intense Father James Sorra, director of vocations for the Archdiocese of Baltimore, had just explained the difference between the Pharisees, who believed there was a resurrection after death, and the Sadducees, who did not.

“They were sad, you see,” Father Sorra said in his homily during the early morning Mass on the first full day of the 2016 Baltimore Youth Catholic Conference.

Somebody in the congregation, assembled in a conference room at the Clarion Resort Fontainebleau Hotel, cleared his throat; there were a few charitable “hah”s.

“Don’t – That was terrible,” Father Sorra said with a dejectedness that was too serious to be authentic, signaling that the flop was the real joke.

Father James L. Sora, director of vocations for the Archdiocese of Baltimore, asks everyone to pray for those considering a religious vocation during his homily at the Baltimore Youth Catholic Conference Mass Nov. 19.  (Kevin J. Parks/CR Staff)

The high-school-aged youths and their chaperones suitably disarmed, the priest went on to extol the celibate vocation, described by Jesus in the Gospel of Luke – “…those who are deemed worthy to attain to the coming age and to the resurrection of the dead neither marry or are given in marriage” – and exemplified in the clear and present by Father Sorra himself and concelebrants Father Michael Triplett, pastor of Our Lady of Grace in Parkton; Trinitarian Father Victor Scocco, pastor of St. Lawrence Martyr in Jessup; and Conventual Franciscan Father Matthew Foley, campus minister and chairman of the religious studies department at Archbishop Curley High School in Baltimore.

“We’ve got skin in the game,” Father Sorra said, gesturing at his companions. “Heaven is real. It’s worth everything, and it’s more than you can possibly imagine.”

He was one of many “masters” who pulled out every stop and deployed all tricks in the hope that the youth of the Baltimore Archdiocese might – as they careen toward young adulthood and a world that cares little for that which is not of it – retain the seeds of wisdom.

For headline speaker Ansel Augustine, director of the office of Black Catholic ministries for the Archdiocese of New Orleans, one sower of those seeds was his primary father figure, the late Father Michael Jacques of the Society of St. Edmund, longtime pastor of St. Peter Claver Church in the Big Easy’s Treme neighborhood.

Employing a rhetorical device, Augustine told the story of how “a friend of mine who’s a youth minister” left New Orleans just before Hurricane Katrina hit, turned the flight into an impromptu vacation, and switched on the news in Orlando, Fla., to see that the levees had broken.

When he was finally able to sneak back into New Orleans, he found himself identifying bodies, “of loved ones, family, friends and church members.”

“One day, he got the call he was dreading,” Augustine related.

The youth minister’s girlfriend had been among the missing, and her mother asked him to help identify her body, temporarily stored with many others in a makeshift morgue of tractor trailers.

“Church, I want you all to understand something,” Augustine said. “That youth minister was me.”

“Eleven-and-a-half years ago, I thought things were stable,” he continued. “Things were good.”

Due to the trauma and grief brought by Katrina, however, “I almost lost my faith.”

The empty St. Peter Claver Church, where Augustine served as youth minister, became his lifeline. As he cleaned and repaired the church by day and guarded it from looters at night, he had just one companion.

“I started talking to (Christ) more and more because I was alone in the church,” he said. “God was walking with me closer than I realized.”

Youth ministers, pastors and concerned adults tell youths to turn to Him because “they want you to know who is there when nobody else is,” Augustine said.

Hannah Yost, a sophomore at The Seton Keough High School who came to the conference with youths from St. William of York in Ten Hills and St. Agnes in Catonsville, found Augustine’s testimony so moving that she sought him out for a hug after he had sat down.

“Hearing him talk about giving up and almost not having faith anymore, and turning all that around, was really familiar for me,” said Yost, adding that she had had a severely difficult experience of her own while in middle school.

A series of workshops on wide-ranging subjects from racism to meditative prayer gave attendees of the youth conference the opportunity to explore aspects of their Catholic faith in smaller groups.

Julius Othole, a member of the Zuni tribe from Zuni Pueblo, N.M., had intended to bring clay from his homeland for youths to mold, but found that the substance raised hackles at airport security.

“Are you sure it’s not explosives?” they had asked him.

“I guess they saw too many war movies or something,” he told the youths who chose to attend his workshop on Zuni spirituality.

“The first thing we do when we wake up is thank God, each and every day,” he said.

The Zuni, Othole explained, have known Catholicism since the 1500s thanks to the Spanish.

Zuni people were killed and forced into labor, Othole said, some having arms or legs cut off for refusing to build churches.

“Through all that – all that violence – one thing always stood out,” he said. “There’s only one God.”

It stood out even after the Indians expelled the Spanish colonists in the Pueblo Revolt of 1680, possibly the most successful Native American uprising in North American history.

“When (the Spanish) came back, we accepted them,” Othole said, “because they had given us the Catholic faith.”

He explained that the Zuni were happy to know Christ, as their own traditions had always been monotheistic. Some of those traditions remain to this day, incorporated into their present-day Catholic worship.

A middle school teacher at St. Anthony’s Indian School in Zuni Pueblo, Othole brought clay crosses created by his students in a prayerful process, which he invited the Baltimore youths to paint in Zuni-inspired designs.

“These crosses come from Mother Earth,” he said. “They take us about two weeks to make. They don’t seem like much, but there are prayers to go with them.”

“We brought these for you to paint your own stories,” he continued. “Each of you has to pick up your own cross whenever you are told.”

His own got heavier a couple years ago, he related, upon the death of his mother.

Caitlin McComas, a parishioner of St. Margaret in Bel Air and senior at The John Carroll School, both in Bel Air, said that Othole’s workshop was perfect for her, as her ceramics class is one of her favorites.

The workshop, she said, reinforced to her that “yes, there are different religions, and yes, they may seem strange, but we all believe in a greater person or being out there.”

Othole first met Baltimore youths during the summer, when a group from Holy Family Parish in Davidsonville were in Zuni Pueblo for a mission trip.

“My wife and I saw a bunch of youth in the church and school and said, ‘What’s going on?'” Othole remembered.

Mike MacDonald, one of the organizers of the youth conference, is youth minister at Holy Family.

Othole said that he hopes to bring a whole group of his students to the Baltimore area in the future.