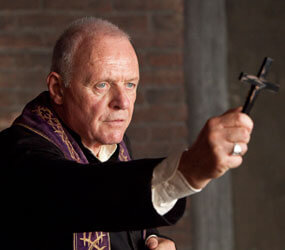 TORONTO – The exorcism began after Mass as the exorcist and several parishioners gathered around a troubled young man and started praying over him, recalls Father Joseph Muldoon, episcopal vicar of the Ottawa Archdiocese.

Father Muldoon, who oversees the work of Ottawa’s lone official exorcist, is not an exorcist himself, but this was one of two exorcisms he assisted over the years. Both occurred outside of Canada.

Father Muldoon joined in praying for the young man who dabbled in drugs and the occult. The man exhibited one of the signs of demonic possession: a supernatural strength requiring him to be restrained by several people to prevent harm to himself and others around him.

The priest performing the exorcism, trained under the ancient rite, blessed the man with holy water. He then placed a crucifix and Bible on his chest, some of the norms of the rite established in 1614.

“The priest gradually, slowly commanded the evil spirit to leave him and never to return, to be placed at the foot of the cross,” Father Muldoon said.

The young man was invited to say Jesus’ name and pray the Our Father with the community. He was freed from the devil’s grasp, said the priest.

Exorcisms have always piqued the Hollywood imagination and provided a steady source of material for filmmakers in the horror genre. And with a new movie set for release Jan. 28, plus a reality-TV series on exorcists, Hollywood is once again entering the battleground of good vs. evil.

“The Rite,” a film featuring Anthony Hopkins, is based on a book by journalist Matt Baglio about the accounts of an American exorcist. Meanwhile, the Discovery Channel is reported to be working on a reality show called “The Exorcist Files.”

Father John Horgan, a scholar on exorcisms and pastor of Sts. Peter and Paul Parish in Vancouver, British Columbia, was a consultant to the 2005 movie “The Exorcism of Emily Rose,” a movie loosely based on an actual case in Germany.

He cautions that Hollywood versions of exorcism usually provide a liberal interpretation of the actual rite. A scene of “being chained and tied up has nothing to do with the Catholic rite of exorcism,” he said.

“Ours is very sober, reverent. Heads do not turn around” as was made famous in a scene from the 1973 film “The Exorcist,” the most profitable horror film of all time.

An exorcism is the ritual of evicting demons or other spiritual entities from a person or place believed to be possessed. According to the Catechism of the Catholic Church, an exorcism is performed by an exorcist who asks “publicly and authoritatively” in Christ’s name “that a person or object be protected against the power of the Evil One and withdrawn from his dominion.” This power comes from Jesus, who exorcised demons in the Bible.

While Hollywood may play up the drama of exorcisms, the key message about them is not how evil takes over, Father Horgan said: It’s how the power of God always triumphs in the end.