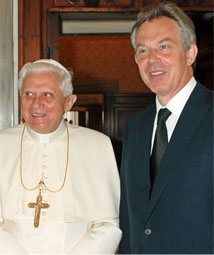 Mr. Blair, previously an Anglican, was received into full communion with the Catholic Church by Cardinal Cormac Murphy-O’Connor of Westminster. Mr. Blair was sponsored at the Mass of reception by his wife, Cherie, a Catholic.

The Dec. 21 Mass at Archbishop’s House, the cardinal’s private residence, was attended by Mr. Blair’s family and close friends. Cardinal Murphy-O’Connor said in a statement Dec. 22 that he was “very glad” to welcome Mr. Blair into church.

“For a long time he has been a regular worshipper at Mass with his family and in recent months he has been following a program of formation to prepare for his reception into full communion,” the cardinal said. “My prayers are with him, his wife and family at this joyful moment in their journey of faith together.”

He now serves as envoy to the Middle East for the Quartet, a group comprised of the United Nations, the European Union, the United States and Russia.

He was admitted into the church using the liturgical rite of reception of a baptized Christian, which involved him making a profession of faith during the course of the Mass.

He was given doctrinal and spiritual preparation by Monsignor Mark O’ Toole, the cardinal’s private secretary, and also made a full confession before his reception.

For most of his adult life, Mr. Blair has attended Mass each Sunday with his wife. Their four children – Euan, Nicky, Kathryn and Leo – were baptized in the Catholic Church and raised as Catholics.

“It was a very moving occasion,” said the cardinal. “I suppose for him (it was) the end of a process, in the sense that he’s been thinking about becoming a Catholic for a long time.

“But also, in another sense it’s a beginning, because when you become a Catholic, as so many people who have become Catholics have said to me, it’s like coming home,” he said.

“This was a gift for Tony, a personal journey, a gift for his family,” he said, adding that Mr. Blair became a Catholic “partly because of the example of his family.”

“I think also it’s not just in his travels as prime minister, but even before that, there was something he said to me, that he feels at home in the Catholic Church in a way that he didn’t in any other church or in the Anglican commune,” the cardinal added.

At the Vatican, a spokesman expressed “joy and respect” at Mr. Blair’s decision.

Father Lombardi said the church was happy to welcome such a “prominent personality.” He emphasized that Mr. Blair’s decision was not an impulsive one, but came at the end of a “long and profound journey of faith.”

Some Catholics and pro-life groups questioned the sincerity of Mr. Blair’s profession of faith in view of a political career in which he consistently voted for abortion rights.

John Smeaton, director of the Society for the Protection of Unborn Children, said in a Dec. 22 statement that he found Mr. Blair’s decision to become a Catholic “decidedly strange.”

“We are very concerned,” said Mr. Smeaton, a Catholic. “During his premiership, Tony Mr. Blair became one of the world’s most significant architects of the culture of death: promoting abortion, experiments on human embryos – including on cloned human embryos – and euthanasia by neglect.

“We are writing to Tony Blair to ask him whether he has repented of the anti-life positions he has so openly advocated throughout his political career,” he said.

Ann Widdecombe, a Conservative Party member of Parliament and a former Anglican who became Catholic in the early 1990s, told Catholic News Service Dec. 24 that the church would not have accepted Mr. Blair unless he assented to all its teaching on faith and morals.

“He would have had to change his mind” on matters such as abortion, said Widdecombe. “But I think he should now make that public for the avoidance of doubt.”

Even before he became prime minister there was speculation that he was about to become a Catholic. In the mid-1990s, the late Cardinal George Basil Hume of Westminster wrote to Mr. Blair to ask him to stop receiving Communion in the Catholic parish of St Joan of Arc near his home in north London.

When Mr. Blair moved to Downing Street, he continued to worship with his family but at nearby Westminster Cathedral.

The onset of the war on terror following the Sept. 11, 2001, terrorist attacks meant it was dangerous for him to attend public services. Masses were then celebrated at Downing Street by Father Michael Seed, a Franciscan Friar of the Atonement, who renewed speculation over Mr. Blair’s conversion earlier this year when he told a journalist that Mr. Blair was “practically a Catholic.”

Speculation intensified again after Mr. Blair accepted an invitation from New York Cardinal Edward M. Egan to be the guest speaker at the Alfred E. Smith Memorial Dinner in October.

Scottish Cardinal Thomas Winning of Glasgow publicly criticized him over his voting record on abortion.

Mr. Blair was also said to have endured a frosty 15-minute meeting with Pope John Paul II in February 2003, less than a month before British troops joined a U.S-led invasion of Iraq. At that meeting, the pope warned him that a war would disturb the whole Middle East and exacerbate tensions.

Mr. Blair returned to the Vatican in June, just weeks before he stepped down both as prime minister and a member of Parliament, for a meeting with Pope Benedict XVI.

Britain has never had a Catholic prime minister, although there is no constitutional barrier to such a move.