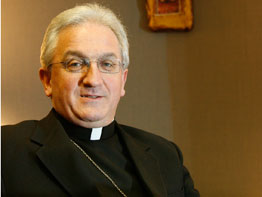 NEW YORK – Ongoing debate about climate change “has helped put into focus the inescapable responsibility of one and all to care for the environment,” the Vatican’s U.N. nuncio told the U.N. General Assembly Feb. 13.

This has resulted in “building consensus around the common objective of promoting a healthy environment for present and future generations,” he said.

The underlying theme in the nuncio’s statement to the 62nd session of the General Assembly was that a concern for humanity, in particular for those most vulnerable to the effects of climate change, translates into a concern for the environment.

“Thus we are better equipped to adopt strategies and policies which balance the needs of humanity with the urgency for a more responsible stewardship,” he said.

He restated the Holy See’s commitment to implementing the goals and objectives set out in the U.N. Climate Change Conference in Bali, held Dec. 3-14, 2007, and the “personal commitment and numerous public appeals of Pope Benedict XVI,” who has called for “a renewed sense of respect for and the need to safeguard God’s creation.”

He noted that individuals and communities have started to change their lifestyle, knowing that “personal and collective behavior impacts climate and the overall health of the environment,” and added that even the smallest effort “to reduce or offset one’s carbon footprint” shows commitment to the environment.

Archbishop Migliore reminded the assembly that the Vatican has already taken steps to reduce and offset the carbon emissions of Vatican City State through the use of solar panels, to be installed this year on its audience hall, and its collaboration in a reforestation project in Hungary.

The archbishop also advocated the use of “clean technologies” as an important component of sustainable development.

It is important for highly industrialized societies to share with underdeveloped countries their more advanced and cleaner technologies to “avoid the errors that others committed in the past,” he said.

He recommended that markets be “encouraged to patronize ‘green economics’ and not to sustain demand for goods whose very production causes environmental degradation.” Further, “consumers must be aware that their consumption patterns have direct impact on the health of the environment,” he said.

Archbishop Migliore praised the “Bali road map” for presenting “a common vision, capable of overcoming self-interest through collective action.” He said it demands a global alliance be formed to adopt a coordinated international political strategy aimed at creating a healthy environment for all.

“Through interdependence, solidarity and accountability, individuals and nations together will be more able to balance the needs of sustainable development with those of good stewardship at every level,” he said.