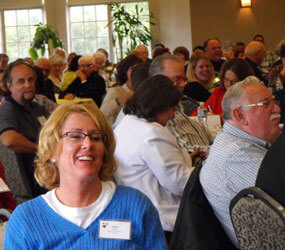 Let the Gospel surprise you.

That was the message Archbishop Edwin F. O’Brien had Oct. 6 and 9 for 445 clergy, religious and lay people working in Archdiocese of Baltimore parish, school and Catholic Center ministries.

The archbishop spoke at the gathering, called “Together in Mission,” at Holy Family Catholic Community in Middletown and Woodlawn’s St. Gabriel. Those gathered examined the meaning of the call of evangelization and how that translates to parishes and the archdiocese.

“All of us are called to evangelize and it is our challenge to convince our Catholic people they are to evangelize,” Archbishop O’Brien said before a crowd of 284 at Holy Family Oct. 6. “We must first explain what the word evangelize means and I think it’s to be surprised by the Gospel, by the encounter with Jesus Christ. Once we are surprised by that, surprised by him, the surprise will be contagious. We’ll smile more often.”

The gatherings were hosted by the Department of Evangelization. Its executive director, Paulist Father John E. Hurley, presented his and the archbishop’s vision for the future of evangelization in the archdiocese.

“In my role as head of his new initiative, it is my task on his behalf, to make sure all we do in our archdiocese is done through the lens of evangelization,” Father Hurley said.

Father Hurley said the church exists to evangelize and that everyone must re-examine what and how they carry out that mission from parishes to prisons. As he concluded his spirited talk, Father Hurley called for solidarity.

“Yes, these are challenging times for us in pastoral leadership,” he said. “However, they must be exciting times for us since we said ‘yes’ as Jesus’ disciples. That ‘yes’ is filled with much hope and light that you and I can bring to a world that is longing for it.”

During group discussions, those in youth ministries said a lack of resources can often be daunting. Sometimes, they said, they are held back by the adage “we’ve always done it this way,” while realizing change can be good.

Father Edward S. Hendricks, director of Catholic Campus Ministry for the Osborne Newman Centers and chaplain for Frostburg State University, was excited by the conversations.

“This many people coming is tremendous, and it really says there’s a yearning and hunger for evangelization across our archdiocese, which is good” Father Hendricks said. “I think we were looking for renewed energy and renewed direction, and I think we’ve have it here. I think Father Hurley has been phenomenal in his outlook on what we’re doing and his support of what we’re doing. I find it very energizing. ”

“I think it gives great hope to all those who are here, but also puts into perspective the challenges to come,” Valdez said. “We’re going to have these great discussions and something we want to stay away from, but as evangelists and disciples of Christ, we have to embrace the good and the challenging. When you come to faith, everything is personal. If it doesn’t strike a nerve somewhere, there’s probably something wrong.”

The Archdiocese’s director of Catechetical and Pastoral Formation, Ruth Puls, said she heard enthusiastic discussion about the future on the way out of the meetings.

“If we do our ministry with joy, if we’re Gospel-centered, if we let the Gospel surprise us every day, then we remember what we’re about,” Puls said.