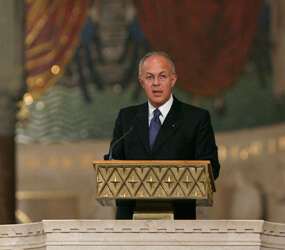 WASHINGTON – Hundreds of people poured into the Basilica of the National Shrine of the Immaculate Conception Sept. 11 and 12 for a eucharistic congress sponsored by the Council of Major Superiors of Women Religious.

Pilgrims from across the country came to worship Jesus in the Eucharist, listen to talks given by the head of the Knights of Columbus and the daughter of St. Gianna Molla, and see fireworks shoot into the sky next to the shrine. They also attended workshops held throughout the day Sept. 12. The theme of the gathering was “Sacrifice of Enduring Love.”

Before the opening Mass began on the evening of Sept. 11, hundreds of sisters in many different colored habits filled a large portion of the center pews in the basilica’s Upper Church.

Cardinal Justin Rigali of Philadelphia, who delivered the homily at the Mass, said the key to understanding the Eucharist is to understand how Jesus was “motivated by a great love for his Father.”

There is an “explicit connection between Calvary and Christ’s love for his Father,” the cardinal said. “We are here to acknowledge the power of his blood, … the sacrifice our Lord, Jesus Christ offered for us on Calvary.”

Archbishop Wuerl said what brings people to the eucharistic congress is the knowledge that the “central work of (the church’s) salvation becomes really present” in the Eucharist.

Following the Mass, Carl Anderson, supreme knight of the Knights of Columbus, said the Eucharist is a “living sign of a spiritual reality.”

“The Eucharist reaches every corner of every life,” he said. “Each of us has some vocation, the vocation to love. If God is love, and the Eucharist is the face of God’s love, it makes sense to take the Eucharist inside ourselves because we become more loving.”

Anderson also spoke about vocations, and the need to live a joy-filled life so others can see the beauty of the priesthood, consecrated life and married life.

It is “not scandal, but joylessness,” that is responsible for the lack of vocations, he said.

Students from Oklahoma State University and the University of Tulsa in Oklahoma flew across the country to attend the eucharistic congress.

Beth Willis, a junior at Oklahoma State University, said she came to see St. Gianna Molla’s daughter, Laura Molla. She also came to discern her vocation and grow in faith and love for the Eucharist.

“That is the source and summit of our lives,” she said. Participating in Mass and sitting in front of the tabernacle can “be a release,” she added.

Joan Nuttall, a junior at University of Tulsa, said she also came to learn more about the Eucharist.

She said she hopes to learn “something about how to apply (the Eucharist) in my daily life.” Nuttall added that after Mass, when the priest dismisses people to go out into the world, sometimes she doesn’t use the grace given to her in the Eucharist “as much as I could.” She hoped to learn more about how to do this at the eucharistic congress.

Lynne Jakobowski, whose husband served in the Knights of Columbus honor guard at the Mass, said the Eucharist brings her peace and closeness with God.

Later that evening, families, priests and sisters gathered outside the shrine to pray, sing and watch a fireworks display.