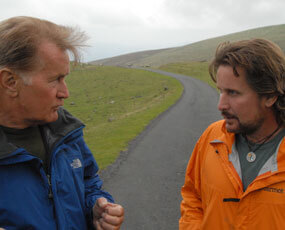 WASHINGTON – Actor and director Emilio Estevez, once a member of the 1980s “Brat Pack” of young Hollywood stars, is as of late a director, most recently of “The Way,” which stars his father, Martin Sheen. The movie deals with a man (Sheen) who completes a walk along the Camino de Santiago in Spain – the Way of St. James – after his son dies midway through the journey.

Catholic News Service conducted an interview with Estevez via e-mail while he was in Spain filming “The Way.”

Q: How do you choose the film projects you do and what are you trying to accomplish as a filmmaker – to just entertain, to tell a good story, or tell a good story that you hope will have an impact on people’s lives?

A: For starters, making a film for international distribution is no easy task and making a good film is even more difficult in today’s market. When I choose a project and “dig in” to proceed to production, I always have to ask myself, “Is this a story I want to live with for the next two years?” Which is about the average length of most Hollywood marriages!

But minus the lengthy development process, that’s about what the filmmaker can expect to invest – two years to bring the story to your local multiplex. So, the older I get, I feel a sense of responsibility to tell stories that will have an impact on people long after they’ve left the theater.

Q: You started out acting. When did you decide to work behind the camera as a director and why?

A: Directing isn’t something I just woke up one day and said, “Gee, wouldn’t that be cool to try.” I’ve been a card-carrying member of the DGA (Directors Guild of America) for 25 years. From the beginning of my career, I was always interested in directing, writing and storytelling.

Q: How would you respond to the criticism that the majority of films coming out of Hollywood these days are full of violence and sex and have a negative impact on our culture? Does Hollywood need to clean up its act or is the criticism not justified?

A: Hollywood doesn’t seem interested in making movies that move, touch and inspire. Perhaps a not-so-secret reflection on how the industry feels about itself. These days, audiences must look to documentaries, foreign films and indies to serve up some measure of humanity on film.

Q: It’s a long time since “The Mighty Ducks,” and even a longer time since “The Breakfast Club” and the Brat Pack. How much do you still have to deal with the ripples from those bursts of fame?

A: I have been fortunate enough to have been associated with some very lucrative franchises, “The Mighty Ducks” and “Young Guns” as well as appear in pictures that have leapt across generations, “Breakfast Club” “St. Elmo’s Fire” and “Repo Man.”

So, while these films are older, the penetration was strong and therefore, there are very few places I can travel unnoticed, Spain being the most recent example, where I am currently filming “The Way.”

Q: Who do you think will want to see “The Way”?

A: I am not sure what draws people to the movies except the obvious: aggressive marketing and media saturation. But a small film with big ideas like “The Way” will depend on word of mouth, reviews, and maybe a grass-roots movement of people who are tired of seeing films that aren’t about people anymore.

Q: What drew you to weightier fare in the first place?

A: It’s sort of like; you wake up one day and decide you don’t want to eat a certain type of food anymore. You lose your taste for a certain type of experience and are drawn to another. It’s part of the maturation process, I suppose.

Q: It’s not exactly as if you’ve been the victim of overexposure on TV or film the past several years. Are you OK with your limited acting appearances as of late?

A: My life to date is the sum total of my choices to date. Currently, I am enjoying the luxury of being able to tell the stories I want to tell, without having to serve some larger entity. It’s no doubt the reason I have run screaming from doing a television series. Being in control of your own projects doesn’t always ensure a sound future economically, or guarantee that you’ll find your face plastered on magazine covers. But it does mean that I don’t have to sell detergent and dog food if I don’t want to.

The business is full of people who simply want to be famous. They are happy to sell anything to anyone at any price and in the process sell their very essence. It’s a Faustian deal and it’s not for me.

Q: Now that you’ve been in Spain with your father, along the same “way” as your son (who lives in Spain near the Camino), how has it affected you?

A: Filming “The Way” along the Camino de Santiago has once again reminded me about the global village we all live in. I met pilgrims from all over the world, Catholics and nonbelievers from South Korea, Japan, France, Germany, South America and Africa, all with one purpose in mind – to arrive safely in Santiago – and in doing so, arrive at some place of inner, personal peace.

And I believe that’s what we’re all really trying to achieve. Whether we’re on pilgrimage or not.