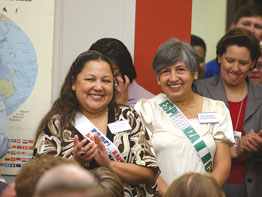 As Archbishop Edwin F. O’Brien prepared to bless Catholic Charities’ Esperanza Center in Fells Point May 20, he described it as “one of the many jewels” he has inherited as Baltimore’s archbishop.

“This is a well-named house – hope,” he said, noting the many generous donors and volunteers of the center. “I don’t think there’s a Catholic Charities that could match Baltimore’s.”

More than 100 individuals filled the first floor of the 12,000-square-foot, $1.3 million newly reconfigured center on Broadway, formerly known as the Hispanic Apostolate, which serves thousands of immigrant clients and has some 100 volunteers. The much-needed renovation was funded by private donations and a bond bill from the state of Maryland, and $800,000 is still needed to pay for the project, according to Harold A. ‘Hal’ Smith, executive director of Catholic Charities.

Mr. Smith said the centerpiece of the reconfigured center is the second-floor health clinic, which includes a variety of offices and patient rooms. St. Joseph Medical Center, Towson; Johns Hopkins Medicine, Baltimore; St. Agnes Healthcare, Catonsville; and the University of Maryland Dental School will donate a range of services to children and adults on various days. Patients pay $10 per visit to help offset operation costs, although those unable to pay will not be denied assistance.

For the past 10 years, St. Joseph provided medical care for adult clients through the St. Clare Medical Outreach Van. With the new facility, more than 4,000 patients are expected to be seen within the year, according to Catholic Charities.

Cynthia Fickes, director of Esperanza for nearly five years, said the center was established in 1963 and has operated in several locations and under a variety of names. She said that in 1994, Father Mark Horak, S.J., established Immigration Legal Services, which merged with the former Hispanic Apostolate. Today, Ms. Fickes said there are 800 open cases supported by ILS attorneys.

A new language lab including 20 laptops loaded with new English as a Second Language curriculum will help immigrants, about 75 percent of whom are Latino, learn the language. The remaining 25 percent of immigrant clients come from 170 different countries, according to Ms. Fickes.

“Many, many of the people we see here are in this country because they can’t survive in their own country; so they come here looking for work and a better life for them and their children,” said Ms. Fickes. “Many are eager to learn the language – and it’s a difficult language to learn – but they are not always eligible for services, so we try to fill that gap in what we offer here.”

She said people are most gracious and thankful for the services, and some who were clients 25 years ago are returning to teach English.

Before blessing the facility with holy water, the archbishop recited a prayer in Spanish.

“(The new center) is so wonderful and beautiful,” said Jermin Laviera of Venezuela, who has worked at the center for 22 years. “We do it all for the clients.”