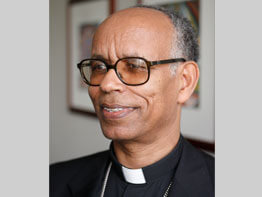 WASHINGTON – Eritrean Bishop Menghisteab Tesfamariam of Asmara urged Eritreans in North America to unite in faith and prayed that the international community would work for peace between his country and Ethiopia.

Bishop Tesfamariam, 59, met Aug. 13 with the director of the Department of Justice, Peace and Human Development of the U.S. Conference of Catholic Bishops in Washington, one of several stops on his five-week pastoral trip through North America to visit Eritrean immigrants.

The bishop said he was not asking the bishops’ conference to influence the U.S. government or United Nations to intervene in the political struggles between Eritrea and Ethiopia, two neighboring countries in the Horn of Africa.

“It is a rather delicate subject,” he told Catholic News Service Aug. 13. “For me as a bishop to speak in a political way may not be helpful.”

From 1998 to 2000, Eritrea and Ethiopia went to war over portions of the 620-mile border that separates the countries. The conflict left approximately 70,000 people dead.

In 2000 leaders of both countries signed an accord that set up a commission to deal with the border conflict. The commission ruled in 2002 that the town of Badme, which sparked the two-year war, be turned over to Eritrea, but to date Ethiopia has refused to cede control.

In July Bishop Tesfamariam met in Zambia with the Association of Member Episcopal Conferences in Eastern Africa, which called for reconciliation through justice and peace, he said.

While in North America, Bishop Tesfamariam will travel to Atlanta, Chicago, Dallas, Los Angeles, Toronto and Calgary, Alberta. It is estimated that some 60,000 Eritrean Catholics currently live in North America.

Bishop Tesfamariam said there is a growing concern that young Eritreans will lose their values and faith while living in North America.

While in the U.S., he will also attend the 11th gathering of Eritrean Catholics of the Geez Rite in North America Aug. 15-16 in Atlanta and will concelebrate the liturgy on African Prayer Day Sept. 19 at the Basilica of the National Shrine of the Immaculate Conception and Sept. 20 at St. Augustine Catholic Church, both in Washington.