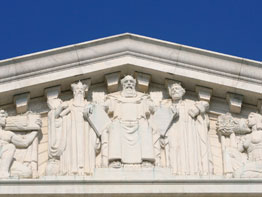 VATICAN CITY – Anytime there’s mention of a new Ten Commandments at the Vatican, journalists start salivating. So the buzz was high when a new “Decalogue for the Environment” was promised in early June.

As it turns out, though, these Ten Commandments were not headline material. Instead of a list of “Thou shalt nots,” a Vatican official presented a set of 10 basic principles to keep in mind on environmental issues.

Meanwhile, an Italian theologian and spiritual adviser to Italy’s national agricultural federation came up with his own Ten Commandments, focusing on what he called “ecological sins.”

As the environment continues to evolve as a main theme of Pope Benedict XVI’s pontificate, here is a look at these two takes on offenses against environmental ethics – one nuanced, the other more pithy.

Bishop Giampaolo Crepaldi, secretary of the Pontifical Council for Justice and Peace, offered 10 principles drawn from the Compendium of the Social Doctrine of the Church. Here is an abbreviated version:

1. The human being, created in God’s image, is placed above all other earthly creatures, which must be used and cared for in a responsible way.

2. Nature must not be reduced to a utilitarian object of manipulation, nor absolutized or placed above human dignity.

3. Ecological responsibility involves the entire planet in a common duty to respect a collective good, for present and future generations.

4. In dealing with environmental problems, ethics and human dignity should come before technology.

5. Nature is not a sacred or divine reality, removed from human intervention. Thus, human intervention that modifies some characteristics of living things is not wrong, as long as it respects their place in the ecosystem.

7. Ending global poverty is related to the environmental question, remembering that the goods of the earth must be shared equitably.

8. The right to a safe and clean environment needs to be protected through international cooperation and accords.

9. Environmental protection requires a change in styles of life that reflect moderation and self-control, on a personal and social level. That means moving away from the logic of consumerism.

10. Environmental issues also require a spiritual response and a greater awareness that the created world is a gift of God.

Monsignor Carlo Rocchetta, who works as a sort of chaplain to Italian farming organizations, took a more traditional approach and used the Ten Commandments schema – though his adaptation would never fit on stone tablets:

1. I am the Lord your God: You shall not cause situations of danger or death in the order of nature, especially if they can become permanent and uncontrollable.

2. You shall not commit violence to the created world and its integrity: There exists an “ecological sin” that offends me, just as a personal or social sin offends me.

3. Remember to respect the unity of the life-system and the interdependence that exists among beings: The future of humanity is at stake. Seek a lifestyle that is moderate, just and respectful of nature and the common good.

4. Honor the variety of living creatures, flora and fauna: It is a gift and a richness for all; do not impoverish or destroy it. Appreciate biodiversity; value and promote it.

5. You shall not kill economic democracy, social justice and solidarity in the name of economic and financial powers that cancel the freedom, creativity and initiative of smaller entrepreneurs.

6. You shall not use the genetic patrimony and the knowledge of the human genome for profit or gain: All that is written in creation is shared and should serve the good of all humanity.

7. You shall not steal or create new forms of poverty and exploitation of the weakest, using a perverse economic system in which the poor make the rich richer.

8. You shall not bear false witness to consumers, lying about products, generating food insecurity or even disease. Respect life in all its forms and work to produce safe foods.

9. You shall not desire agriculture without farmers, anonymous and unconnected to the land. Value the task of “custodian” and “cultivator” that I entrusted to man from the beginning.

10. You shall not destroy traditional regional products or those of quality, the tastes and flavors of the earth; do not contaminate healthy seeds and livestock with cultures and fodder that may not be safe. Intervene in nature to improve it, not to threaten or do violence to its delicate balance.

Whichever version of the “environmental commandments” are used, it’s clear that following them closely would challenge the current system of agricultural economics and personal consumption.

It bears remembering that the Vatican itself has, to some degree, tried to go greener: installing solar panels, for example, and collaborating in a reforestation project in Hungary designed to offset carbon emissions from Vatican City.