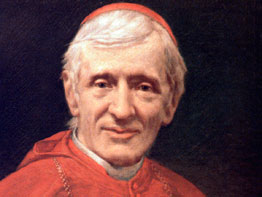 LONDON – The sainthood cause of a 19th-century English cardinal has taken a step forward after the Vatican’s medical commission ruled that there was no natural explanation for the healing of a U.S. deacon who prayed for the cardinal’s intercession.

The progress of the cause of Cardinal John Henry Newman, who shocked English society with his conversion to Catholicism, was announced April 24 by Peter Jennings, spokesman for the Archdiocese of Birmingham, England.

“The case of Deacon Jack Sullivan from Marshfield near Boston, Mass., was discussed and voted on by” the medical commission of the Congregation for Saints’ Causes, Jennings said in a statement.

“The opinion of the doctors is positive,” he said.

After the doctors determined there is no natural explanation for the healing, the case is passed on to a theological commission. The theologians are asked to certify that the alleged miracle took place after prayers for the sainthood candidate’s intercession.

A miracle attributed to Cardinal Newman’s intercession is required before his beatification – a step toward sainthood – can occur.

Deacon Sullivan, 69, was suffering from an extremely serious spinal disorder when he first prayed that Cardinal Newman would intercede on his behalf. The father of three was healed inexplicably of his condition – which had left him bent doubled over – Aug. 15, 2001, the feast of the Assumption of the Blessed Virgin Mary.

Father Paul Chavasse, postulator of the cardinal’s sainthood cause, said in a statement April 24 that he was now praying for a “positive outcome for the remaining steps of the process to beatify our cardinal.”

He urged people “throughout the world to redouble their prayers for the beatification of Cardinal Newman.”

Archbishop Vincent Nichols of Birmingham said: “The church goes to great lengths before arriving at a public declaration of a person’s holiness of life.

“The process is going forward steadily in the case of Cardinal Newman,” he said in an April 24 statement. “We await its next step in prayerful anticipation.”

A second miracle attributed to Cardinal Newman’s intercession would be required before he could be declared the first British saint since St. John Ogilvie, a Scottish Jesuit martyr canonized in 1976.

Before he became a Catholic at the age of 44, Cardinal Newman was an Anglican priest who led the 1830s’ Oxford movement to draw Anglicans to their Catholic roots. He died in 1890 at the age of 89.