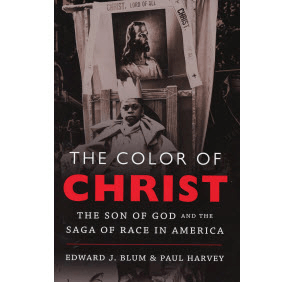 “The Color of Christ: The Son of God and the Saga of Race in America” by Edward J. Blum and Paul Harvey. University of North Carolina Press (Chapel Hill, N.C., 2012). 340 pp., $32.50.
Reviewed by Daniel S. Mulhall
Catholic News Service
From its inception, religion and race have both played important roles in the shaping of life in the United States.
In their book, “The Color of Christ: The Son of God and the Saga of Race in America” authors Edward J. Blum and Paul Harvey tell this story, beginning with the Puritans and ending with the Jon Stewart show on Comedy Central. In its 277 pages of text (plus 48 pages of notes), “The Color of Christ” bring the story of religion and race in American history to life.
The book provides an engaging read and provides insight into many unusual aspects of America’s religious heritage. For example, the authors explain that the image of Jesus that is so often seen in American religious artwork was influenced by the Publius Lentulus myth, which concerns a letter supposedly written at the time of Jesus.
Publius Lentulus, according to the myth, was a Roman official who offered a description of what Jesus Christ looked like: a man of medium height; hair the color of ripe hazelnuts, parted in two on the top of his head; a smooth, ruddy complexion; along with other familiar traits. Although the letter is almost certainly a medieval forgery, this image has had great influence on the American concept of who Jesus was and how he looked.
Given the title of the book, one would expect to see much about how people of different racial groups saw Jesus and the role religion played in the country’s racial past. Here the book does not disappoint. Blum and Harvey provide numerous examples of both. However, the effort to prove that America’s racism is directly related to the promotion of images of the “white” Christ often seems forced and unsupported by the evidence provided.
Without question the images of Jesus that came to the U.S. in European art and those that were created here all showed Jesus as white. Why would that be surprising, as the artists were primarily white and created the images for a white audience?
The authors repeatedly use the phrase “the white Jesus,” but present few arguments other than selected quotations to prove that these images reflected or promoted racist attitudes. The authors have a tendency to offer quotations in lieu of arguments. For example, on page 73, they cite the writing of one American chaplain and one pamphlet to support the claim that many Americans thought that the Revolutionary War was the beginning of the end of the world. Better evidence and argument is needed for such claims.
The authors tell a very interesting tale of the role the physical image of Jesus played in shaping religious feelings in the U.S. That may have actually been a better focus for the book. Their effort to tie these images of Jesus to racist attitudes at times detracts from an otherwise fascinating story, especially in the early chapters.
The connection to white images of Jesus and racial motives is much clearer in the book’s later chapters that look at the period of the Ku Klux Klan – where the connection between white images and white superiority is more obvious – and the one dealing with the period of the emergence of black theology and the black power movement in the 1960s and 1970s.
All in all, “The Color of Christ” is a valuable contribution to our understanding of race and religion and would be of value to anyone interested in the topic of religion and race.
Mulhall is a catechist. He lives in Laurel, Md.
04/12/2013
Copyright (c) 2013 Catholic News Service/U.S. Conference of Catholic Bishops
PrevNext