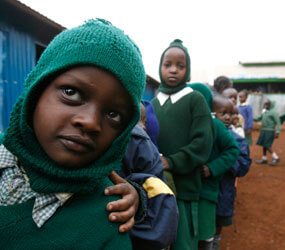 WASHINGTON – Catholic educators and nonprofit groups said Pope Benedict XVI in his latest encyclical continues to inspire them to build awareness of global poverty and to address issues of access to education in vulnerable communities.

In his encyclical “Caritas in Veritate” (“Charity in Truth”), the pope only mentions education by name in one paragraph, but there are implications for education throughout the document.

“The whole document is related to education just because of the link between charity and truth,” said Jesuit Father Charles Currie, president of the Association of Jesuit Colleges and Universities.

The pope wrote that global solidarity can be seen in the promotion of greater access to education.

This is evident in the Jesuit Commons, an international collaboration bringing online courses to Burmese refugees in Thailand. It also is evident in Magis Americas raising $50,000 to build a wing for a school in Peru and in Catholic Relief Services partnering with H2O for Life to provide access to water and education on good hygiene to communities in developing countries.

“It encourages what we’re already trying to do,” Father Currie said in an interview with Catholic News Service. “The encyclical emphasizes both the incredible complexity of all these issues and the great level of opportunity to make a difference. The first step is going to be to get people to read this – and it’s a difficult read.”

Solidarity is important to success, said Tom Gallagher, former director of strategic initiatives at Magis Americas, which was started to assist the Fe y Alegria network of 2,600 schools in 16 Latin American countries. Spanish for “faith and joy”, Fe y Alegria is a Jesuit network founded in 1955. It provides 1 million students with job training, elementary and secondary education and adult education. It includes about 154 religious orders.

“People meeting face to face and in person helps to break down barriers,” Gallagher said. It would cost between $7,000 and $10,000 to ship 200 computers from New York to Latin America, but if international partners put their heads together, they could build warehouses for computer repairs in the impoverished countries, he said.

Fe y Alegria inspired the creation of the Cristo Rey network of Catholic schools in U.S. cities, another example of solidarity in education. The network maintains 24 schools in 21 cities, providing work-study jobs to 6,000 students in poor areas, according to Robert Birdsell, the group’s president. The network is part of yet another network of 29 religious congregations that serve the poor and share donors.

Birdsell said he hopes Cristo Rey can inspire more solidarity and progress when the organization’s founder addresses an international group of Jesuit educators in China in the fall.

“If through the Holy Spirit we can be an inspiration to others and other countries, that’s fantastic,” Birdsell said.

The encyclical also promotes the ideas of faith, justice and one global human family.

“Education in a vacuum isn’t possible,” said Sister Katherine Feely, a Sister of Notre Dame and director of the Education for Justice project at the Center of Concern. The project provides Catholic social teaching resources to high schools and universities.

Ted Miles, relationship manager for religious education at CRS, said he hopes to use the encyclical in an upcoming tool kit to encourage young people to become leaders and to connect Catholics with the mission of serving the poor. People need to learn, Miles said, that in addition to providing opportunities to go to school, they need to help feed the impoverished children who normally earn money for their families when they are not in school.

The National Catholic Educational Association produces, in conjunction with CRS, a curriculum guide called “Engaging Faith in the World” for about 1,300 U.S. secondary schools. One of its focuses is deepening an understanding of the faults of capitalism and why systems keep people trapped in poverty, said Karen Ristau, president of the association.