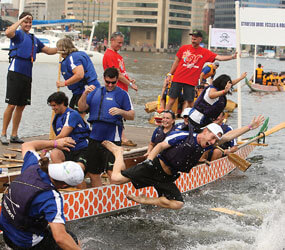 The year of the dragon has arrived.

Catholic Charities biennial Dragon Boat Races, which features teams from some of Baltimore’s leading organizations and businesses, will take place Sept. 11 from 8 a.m. to 4 p.m. in the Inner Harbor.

Twenty-seven teams and 700 paddlers will compete in 35 day-long races for the Dragon Cup. The teams will be in 41-foot-long boats that are 45 inches wide. The festival includes races, whimsical song and chant contests, plus music. The event’s “tent city,” where teams gather between races, will be held at Rash Field.

The races begin by the Inner Harbor’s World Trade Center and end at the Maryland Science Center.

The first edition of the Dragon Boat Races was held in 1998 and has become a marquee event for the city.

Catholic Charities executive director William McCarthy Jr. said he expects $400,000 to be raised this year and a crowd of 10,000 spectators.

“This is one of the most exciting events we have,” McCarthy said. “If you think about the number of people getting engaged, it’s incredible.”

Baltimore City Mayor Stephanie Rawlings-Blake, who is also on a Dragon Boat team for her office, will speak at a 12:20 p.m. ceremony to honor those who died in the Sept. 11, 2001 attacks in New York, Washington, D.C. and Pennsylvania. Paddlers and spectators will join in a sing-along of “God Bless America” at the end of the short ceremony.

The teams of 22 spend nine weeks practicing. They partner with a Catholic Charities program that gives them a greater sense of the various issues and missions the organization addresses.

This is the first race in McCarthy’s Catholic Charities tenure, but he has witnessed others.

“There were many people who just came to see the races, to experience the event,” he said. “The event was much more than just the races. There was something for everybody.”

The paddling team that raises the most money above $15,000 will have the chance to give McCarthy haircut.

“I’m putting my hair where my mouth is,” he joked.

He will take the winning team to a Fells Point restaurant for a hot dog.