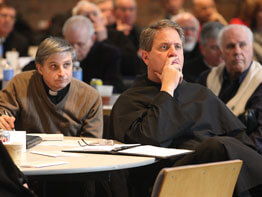 No one has been more aware, or concerned, about those numbers than the archbishop, who called for the meetings in late November. He is scheduled to meet with principals and administrators Feb. 12 at St. John the Evangelist in Columbia, the site of the first meeting.

In his opening address, the archbishop told the priests that enrollment dropped by 1,000 students in the fall. That accounted for 5 percent of last year’s total students and double the drop of the last five years, the archbishop said. The archbishop added that was enough to fill four empty schools.

Declining enrollment and school closings have struck Catholic schools across the country.

“It was not a shock,” the archbishop told The Catholic Review of his reaction to the numbers. “I presumed there were some long-standing projections going on here, as they were everywhere. It was something I couldn’t put off any longer. They’ve been talking it up for years and not enough has happened. It’s going to probably be the most important thing and the most painful thing I do here.”

“While nearly every scenario is on the table,” the archbishop told the assembled, “one scenario is not. And that is a future that does not include Catholic schools. I am wholeheartedly committed to the ideals on which our Catholic educational system was founded, namely that our schools serve as vehicles in which we pass down the faith to our children and through which we provide the truth and hope found in Jesus to all children who seek it.”

No school closings or consolidations were announced as part of the first meeting and none are planned, unless a school encounters a dire situation, archdiocesan officials said.

In the weeks leading up to the meeting, Archbishop O’Brien appointed local businessman Frank Bramble to co-chair a blue-ribbon committee that would enact the archbishop’s vision for schools. He also named Monsignor Robert L. Hartnett, pastor of Essex’s Our Lady of Mount Carmel, executive director last month.

During a brief address to priests at the first meeting, Monsignor Hartnett assured fellow priests, “there is no plan” yet for schools.

The pair also unveiled the members of the panel, which featured local education and business leaders from various religious faiths. The group will meet 18 times, according to Mr. Bramble, with the first potentially coming next month.

Dr. Nancy Grasmick, the superintendent for the Maryland State Department of Education, was among a list of notables including Andres Alonso, CEO of Baltimore City Public Schools and Casper R. Taylor Jr., former speaker of the Maryland House of Delegates.

Mr. Bramble said he believed Dr. Grasmick agreed to be a part of the panel because the archdiocese plays a vital role in educating inner-city youth, where public schools struggle.

Rabbi Lawrence Ziffer, director of the Jewish Education of Baltimore, was an important inclusion according to Mr. Bramble.

“We thought it was very important to have someone from the Jewish community who’s involved in education that is dealing with a lot of the same problems we’re dealing with,” Mr. Bramble said.

Pamela Sanders, principal of St. Ambrose Catholic School in Park Heights, was the lone principal chosen to the panel. She said Catholic schools are more important than ever inside America’s major cites and are fostering productive members of society. She realizes she carries the hopes of many while being on the blue-ribbon panel.

“It’s an awesome challenge” Mrs. Sanders said. “It’s not a burden, but it is an awesome responsibility.”

During the meeting, priests were given a chance to offer suggestions for turning around enrollment numbers. The feedback, the archbishop said, would help inform the 18-month strategic plan created by the blue-ribbon committee.

“I want our priests to know we appreciate the burden they, their principals and teachers are carrying,” Archbishop O’Brien told The Catholic Review. “They’re looking for help and they best know what the scene is on the ground and we don’t. We want them to know that not only do we appreciate the situation, but that we really do hope and pray they will give us their suggestions and observations.”