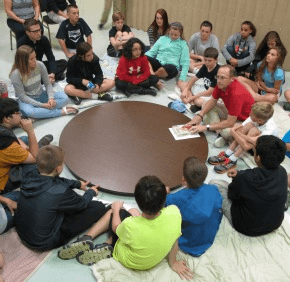 EDGEWATER – For the young Bill Kraus, the steady advance of time was marked by spaghetti.

“I always knew it was the end of the month, because we had spaghetti four nights in a row,” said Kraus, now 53 and a government lawyer.

Though difficulties abounded, up to and including, he said, a period of homelessness, his single mother provided for her five children with love, Kraus explained to the middle-schoolers he serves as a volunteer youth minister at Our Lady of Perpetual Help in Edgewater.

“The Lord loved my mom,” he continued. “He taught her a lot of things, but not how to make spaghetti.”

Kraus’ story enthralled the young listeners, many of whom are students at the nearby Central Middle School in Edgewater. His point was that hardship strikes indiscriminately and sometimes close to home.

“Some people here in Anne Arundel County don’t have enough to eat every day,” he said.

The church strikes back with mercy – in this case, the corporal works: feeding the hungry, clothing the naked, visiting the sick and burying the dead, to name a few.

Bill Kraus, right, is a volunteer youth minister at Our Lady of Perpetual Help in Edgewater, which teams with seminarians in an Advent outreach. (Erik Zygmont/CR Staff)

Expanding on that concept Oct. 13 was seminarian Matt Himes, who Kraus had invited to participate in Edge Night, a youth ministry program that encourages middle-schoolers to see, Kraus said, “that the church isn’t just about Masses or funerals, but also a place to have fun and connect.”

Himes, 26, who is studying at St. Mary’s University and Seminary in Roland Park, warmed up the kids with gentle banter before frankly sharing with them the details behind his call to the priesthood.

The very word – “the priesthood” – came to him while he was “sitting in silence” in the chapel, Himes recounted, a practice he started during his college years at Mount St. Mary’s in Emmitsburg. Though he had “struggled with faith formation” in his youth and questioned the necessity of religious practice, the Mount, he said, exposed him to “friends that had good values and that believed in doing good things.”

Why help those in need? Holding up his five fingers, and borrowing from Blessed Teresa of Calcutta, Himes summarized the answer Jesus gave in the Gospel of Matthew in five words: “You did it to me.”

The Our Lady of Perpetual Help youths will fulfill that call during Advent, purchasing gifts for students at Mother Seton Academy, a tuition-free middle school in Baltimore sponsored by religious sisters and brothers.

On Dec. 5, the youths will make cards and wrap the gifts, as well as gifts to be distributed through Project PLASE, a Baltimore organization serving the homeless, and Food for Thought, an afterschool program for inner-city children operated in Archbishop Borders School in Highlandtown. On Dec. 12, the youths will join the seminarians again to help hand out the Christmas presents.

The effort includes a giving tree at the seminary in Roland Park.

The giving tree at St. Mary’s Seminary and University in Roland Park extends Christmas cheer to those in need, including students at Mother Seton Academy, a tuition-free middle school in Baltimore; Project PLASE, which serves the homeless; and Food for Thought, an afterschool program for inner-city children operated in Archbishop Borders School in Highlandtown. (Courtesy Matthew Himes)

Alexander Kline, 12, an Our Lady of Perpetual Help parishioner since kindergarten, has noticed changes not only in himself but in his public school classmates who participate in the youth ministry program.

“They’ve definitely started to work on some of the teachings from here,” he observed.

“It’s really cool when I get to be with you,” he told his students. “That’s God’s gift to me – and that’s the gift I want you to share with others.”