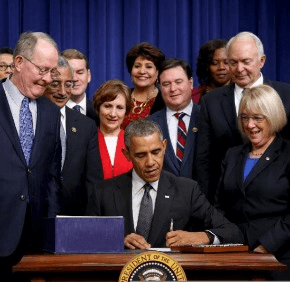 WASHINGTON – When President Barack Obama signed the sweeping bipartisan legislation Every Student Succeeds Act Dec. 10, he described it as a “Christmas miracle.”

“This is an early Christmas present. After more than 10 years, members of Congress from both parties have come together to revise our national education law,” he said.

The other part of the miracle might be that the legislation – which aims to do away with excessive school testing and give states and local governments more control of schools by freeing them from federal mandates – also provides something for Catholic school students.

The measure, overwhelmingly approved by the House and Senate, also was endorsed by the U.S. Conference of Catholic Bishops’ Committee on Catholic Education, the National Catholic Educational Association and the Council for American Private Education.

Archbishop George J. Lucas of Omaha, Nebraska, committee chairman, said the act demonstrates “broad bipartisan agreement on restoring equitable treatment of private schools and ensuring that all children are afforded the education services, benefits and opportunities they deserve, regardless of the type of school they attend.”

The act reauthorizes the Elementary and Secondary Education Act, the 1965 federal law that provides funds to local and state education agencies for elementary and secondary education programs. That law was updated and enacted in 2002 as the No Child Left Behind Act.

No Child Left Behind has been up for reauthorization since 2007. Previous attempts to renew it have been tangled up in ongoing debates about the federal government’s role in public education.

The previous law was often criticized for its emphasis on testing. With the new law, students will still be required to take annual state tests in reading and math, but there will be reduced pressure on schools to perform well. In addition, teacher evaluations will no longer be tied to students’ performance on the tests.

A statement from the NCEA pointed out that during the past few years, it has been involved, along with representatives of the U.S. bishops and the Council for American Private Education, in discussions with congressional lawmakers about inequities in the No Child Left Behind Law “regarding participation of students and teachers in religious and private schools.”

It said that since 2001, “the benefits available to those in private schools have diminished significantly due to funding formulas in the last reauthorization and their interpretations in U.S. Department of Education regulations and policy.”

The new law “corrects those inequities and improves the protection of services for private school children,” particularly with Title I funding, according to the December newsletter of the Council for American Private Education.

Title I, which was part of the original Elementary and Secondary Education Act, provides financial assistance to school districts and schools with high numbers or percentages of children from low-income families.

The new law has specific language about the availability and division of equitable funds for services based on input from public and private school personnel.

NCEA said the new allocation of funding restores “the equity that has long been part” of the Elementary and Secondary Act’s “tradition of providing benefits to our students and teachers.”

The group, which represents the nation’s Catholic schools, said it will provide dioceses and schools with information in the upcoming months about how to obtain benefits from the new law.

One aspect of the new education law that is not inducing cheers and might even be drawing quiet sighs from Catholic school officials, is its failure to include school choice funding.

This omission is clear in the law’s wording of “no Title I portability.” This means federal funds for disadvantaged students will not be able to follow students to the public school of his or her choice.

This wording should come as no surprise for those on both sides of the issue as it was wrestled with while the bill was fine-tuned in recent months. Obama had threatened to veto the bill if it included the ability to move Title I funds because he said it would unfairly redirect federal money from high-poverty to low-poverty districts.

Some House Republicans also wanted Title I aid to be extended to private schools, which is not included in the new law.

Another aspect of the law that is likely to catch some attention is its treatment of Common Core State Standards – a state-led initiative of expectations for students to master in each grade level that has been tied into federal education grants.

The new law changes that, saying federal agencies are prohibited from incentivizing, requiring or conditioning the acceptance of federal funds based on their adoption of Common Core standards or any other set of specific academic standards. The law also notes that states can withdraw from the Common Core program with no financial penalty.

This will likely please some, and not be enough for others.

And the law’s accolades for being an improvement over the previous education law is not enough to applaud it some say.

A Dec. 10 Los Angeles Times editorial said the new law should not just be better than it was but provide a blueprint for improving education.”The federal government spends billions of dollars on low-income schools in an effort to level the playing field and improve social mobility through public education. It has a right and a responsibility to ensure that it’s getting its money’s worth for the billions of dollars it invests in low-income schools,” it says.