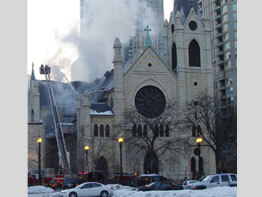 CHICAGO – While parishioners stood and stared with tears in their eyes and firefighters continued to pour water on the roof of Holy Name Cathedral, Cardinal Francis E. George of Chicago told reporters the cathedral would “bounce back” from an early morning fire Feb. 4.

“Chicago has bounced back from fires before,” said the cardinal. “We will bounce back from this.” He spoke to the media after taking a brief tour inside the cathedral.

The blaze, which was of unknown origin and took firefighters two and a half hours to battle, was under control by 7:30 a.m. CST and reported to be out a half-hour later, according to WGN-TV in Chicago.

Fire officials reported there was significant water damage inside. Firefighters had punched holes in the roof to battle the blaze. There apparently was extensive damage to the cathedral’s roof and attic. Archdiocesan chancellor Jimmy Lago told the Chicago Sun-Times that the cathedral would likely be closed for months for repairs.

The fire apparently started in the attic area between the decorative wooden ceiling and the roof, in the area over the altar at the east end of the building. Because it broke out above the ceiling, the fire also was above the sprinkler system.

“The cathedral looks like the cathedral,” the cardinal said, explaining what he saw when he went inside. “Until you see the icicles on the pews and the water on the floor and the water coming out of the electrical fixtures.”

The five “galeros” – red hats belonging to the former cardinal archbishops of Chicago – were still hanging over the altar, Cardinal George said, although he could not say whether they had been damaged by water.

He also expressed relief no one was seriously injured and was grateful “the damage was not worse.” One firefighter suffered a sprained back.

The cathedral had reopened in August 2008 after being closed for repairs after a chunk of the ceiling fell into the sanctuary that February. The cathedral was unoccupied at the time. The Chicago Tribune reported that a piece-by-piece check of the ceiling found that more than 4,000 pieces were either loose or missing.

According to Father Dan Mayall, rector and pastor of Holy Name Cathedral Parish, a worker who arrived around 5 a.m. reported the fire and set off alarms in the building. The pastor’s chief of staff was notified, and he told the priests living in the rectory, which is a separate building attached to the cathedral. The 11 priests who live there were evacuated as a precaution.

Father Mayall phoned the cardinal to alert him to the fire.

Repairs were being made in the area where the fire started. But workers had not been using blowtorches or anything else that would seem to create a fire hazard, and fire officials were “puzzled” as to the cause, the cardinal said.

Father Thomas Mulcrone, the fire department chaplain, was able to enter the sanctuary and remove the Eucharist from the tabernacle. He took it to a nearby chapel.

Mass was to be celebrated at its regularly scheduled times the weekend of Feb. 7-8 in the auditorium of the cathedral’s parish center.

Holy Name Cathedral was built in 1875 to take the place of two churches that were destroyed in the great Chicago fire of 1871.

Pope John Paul II visited Holy Name during his 1979 visit to the United States. Italian tenor Luciano Pavarotti and the Chicago Symphony Orchestra performed in a concert that was part of the papal visit.

The cathedral has, for more than five generations, been the site of major events in the life of the archdiocese, including ordinations, funerals, conferences, rallies and major church gatherings. The first skirmish in the Rainbow Sash movement, the quest for homosexual Catholics to receive Communion at Mass, took place at Holy Name in 2000.

As a parish, Holy Name is home to many of the same ministries found in most Catholic parishes, such as a pro-life ministry and AIDS ministry. As a cathedral, it has been the focal point for the archdiocese’s major liturgies.

In 2003 a small fire, sparked by a Molotov cocktail, caused minor damage to Holy Name Cathedral. Police described the device as a plastic bottle filled with a flammable liquid and a lighted rag stuffed in the neck. It was tossed into the State Street vestibule of the cathedral just after noon. A service was going on inside, but no one saw the person who threw the container. The 100 or so people in the cathedral at the time were alerted by passers-by who saw smoke. The device was quickly extinguished.