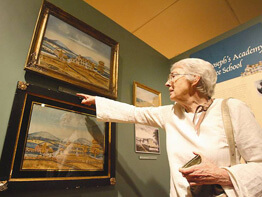 In 1865, a 13-year-old black Catholic schoolgirl stitched her way into Maryland history.
The embroidered sampler of Adele Latimore, daughter of a free black who was educated by the Oblate Sisters of Providence at St. Benedict School in Baltimore, is currently on display at the Maryland Historical Society’s Baltimore museum.

It was the Oblate Sisters who taught the teen how to perfect the cross, tent and continental stitches used in her embroidered sampler of children playing with lambs.

Her artwork accompanies the samplers and embroideries of eight other Baltimore black young women who were taught the craft by the Oblates in the 19th Century, as well as silk embroideries by students educated at St. Joseph Academy and Free School in Emmitsburg, and scores of other works currently on display at the historical society’s Monument Street museum.

“Girlhood embroidery in Maryland grew out of the tradition of English needlework, but was enriched by the styles of various ethic and religious groups,” Ms. Garside said in a thick Scottish brogue. “Unique to Maryland are the antebellum samplers and needlework pictures worked by African American girls – primarily daughters of Baltimore’s free blacks.”
Needlework was considered an indispensable skill in Maryland female education from the mid-18th to mid-19th centuries, said Dr. Gloria Seaman Allen, guest curator at the Maryland Historical Society.
Considered a practical skill for girls in the working class, sewing was usually part of the basic female curriculum, used to teach the alphabet, the rudiments of reading and writing and memorizing biblical verses, Dr. Allen said.
“Among immigrants from Europe were a large number of Catholics, attracted to the rapidly growing city of Baltimore as the center of the Roman Catholic Church in America,” Ms. Garside said during a recent tour of the exhibit. “Fleeing revolutions in France and the Caribbean, many individuals started private schools for Catholic children.”
Some of the most skillfully executed – and possibly among the most valuable – pieces in the exhibit come from students at St. Joseph Academy, with detailed embroidery stitched onto silk, she said.
St. Joseph student Mary Jamison, 13, captured one of the early views of St. Elizabeth Seton’s school when she completed her pictorial sampler in 1812, Ms. Garside said.
As the tour continued, Ms. Garside confessed she was most impressed with the Oblate portion of the exhibit. “These are from kids in the poor segment of society who were doing work that was as fine as the children raised on plantations with governesses.”
This fall the historical society plans to host an embroidery road show, allowing people to bring in samplers, embroideries and quilts for experts to examine and report their opinions of the quality, history and value, Ms. Garside said.
Once the exhibit is over, the 109 vintage embroideries and samplers will be returned to the archives of the Oblates, Daughters of Charity and other religious and secular institutions, to be protected from the light.
“This is a rare opportunity to see these beautiful works of art,” Ms. Garside said. “Most of them won’t be on display once the exhibit is over.”