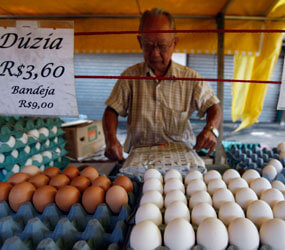 WASHINGTON – Prices for basic foods such as sugar, cereals and edible oils were at or near record highs worldwide in February, according to the U.N. Food and Agriculture Organization.

The organization’s Food Price Index for February showed that prices – except for rice – are higher than they were in late 2007 and early 2008, when food riots broke out in 15 developing nations. More recently, the cost of food was among factors that led Tunisians and Egyptians to rise up against long-ruling autocratic.

The reasons for rising food prices are varied and complex. Largely though, supply-and-demand issues – prompted by low stocks of food – are at play, said Daniel Gustafson, director of the Food and Agriculture Organization’s liaison office for North America in Washington.

Other factors also are at play. Rising oil prices, partially fueled by unrest in oil-rich North African nations; the rapid shift in some developing countries from growing basic foods to planting crops for biofuels; and climate extremes like last summer’s drought in Russia and firestorms in Australia have put inflationary pressure on food markets.

“Everyone is watching to see what’s going to happen,” Gustafson said.

But at least some of the rising price of food is being fed by investor speculation in the commodities futures markets and that’s problematic for families that spend up to 80 percent of their meager income on food, said David Kane, a staff member of the Maryknoll Office of Global Concerns.

With so many pressure points, market watchers and advocates for the poor acknowledged that tough times are ahead for anyone with limited financial resources trying to feed hungry mouths.

The U.N. agency expects food prices to continue a brisk upward swing in 2011.

In the United States, the Department of Agriculture recently revised its 2011 forecast for food prices, setting the projected increase at 3.5 percent, almost double the expected overall inflation rate. In January the agency forecast a 2.5 percent increase for the year.

“If you are in a tight situation, any bad news is going to have a big wave effect,” Gustafson told Catholic News Service.

“High prices are a very serious problem, no question. In many ways the crisis is permanent. There were 850 million people (in 2009) in a crisis hunger situation. Now 900 million are chronically hungry,” he said.

“So the fact that you have hundreds of millions of people who spend most of their income on food … (and) when you have a basic increase like we saw in 2008, you have problems,” he said.

Julian Oram, director of policy and campaigns for the London-based World Development Movement, acknowledged that numerous factors are influencing food prices. He said the volatility of food prices during the past decade partially can be attributed to financial deregulation that began in 2000.

Without limits, investors cornered larger and larger shares of food commodities, forcing up prices and resulting in higher returns, he said.

“That weight of money (from speculators) is pushing up prices far higher than they would be pushed up by the fundamentals (of supply and demand),” he said. “It’s been a real killer for farmers. The volatility for farmers is almost due to that sloshing in and out of gigantic amounts of short-term money.”

The practice of a small number of investors infusing huge sums of money into a specific commodity market is called excessive speculation.

Michael Masters, founder of Masters Capital Management, said speculation is not all bad, but when it causes vulnerable people to struggle to afford a day’s meal, something is morally wrong.

“Driving the price up of inventories is commonly referred to as hoarding,” explained Masters, a Catholic who often has testified to Congress on the excesses of the financial industry. “So you’ve got hoarding from the financial sector that’s adding to the volatility of food and oil prices.”

“The whole focus here is to allow the markets to work for broader society, not just for financial intermediaries,” he said.

A two-continent effort is under way to level the playing field. The United States has a head start on Europe through the 2010 Dodd-Frank Wall Street Reform and Consumer Protection Act. Limits on investments in commodities, particularly food, are among the act’s key provisions.

The Commodity Futures Trading Commission is developing rules to implement the law. Through March 2, the commission had proposed 42 rules governing a wide array of investor actions. The rules came out of public hearings that began in October and were to continue through April. Final rules are expected in July.

Kane said strict rules are needed to spell out exactly what U.S. investors can and cannot do when it comes to commodity trading. Kane and the 450-member Stop Gambling on Hunger coalition that coalesced around the issue in 2009 are pushing the commission to include transparency in financial transactions.

The group also wants to see the establishment of position limits, which specify exactly how much of a specific commodity any single investor – a pension fund, hedge fund or a bank – can hold.

In the United Kingdom, similar measures are being sought. Oram told CNS his organization is pressuring the British government to back proposals to regulate “betting” on food prices in financial markets. The European Commission has backed such proposals.

“Even if you think … that there’s a relatively small impact that speculation – purely profit-motivated activity – could have a devastating impact on people’s ability to buy food, it should be regulated,” Oram said.

More information on food prices as tallied by the U.N. Food and Agriculture Organization can be found online at www.fao.org/worldfoodsituation/wfs-home/foodpricesindex/en. Details on the rules being considered by the Commodity Futures Trading Commission can be found at www.cftc.gov. Information about speculation in the food commodity markets can be found at stopgamblingonhunger.org and www.wdm.org.uk/food-speculation.