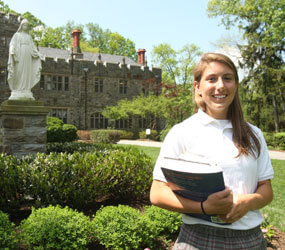 Maryvale Preparatory School’s soccer team didn’t have a great record when Sophia Thomas joined during her freshman year, but she was drawn to the indomitable team spirit.

With a batch of new talent, the team’s record soon turned around. The Brooklandville school played Severn in the championship game at the end of the season but lost.

“It was just heartbreaking to get that far and then to lose it all,” said the 17-year-old who graduated June 5.

Two years later, Maryvale and Severn faced each other in the championship game once again. This time, Maryvale came away the victor. The chance to “avenge the loss” was one of the best moments of Sophia’s high school career.

“The competitiveness of the game – I’m drawn to it,” said the parishioner of Cathedral of Mary Our Queen, Homeland.

That same competitive drive propelled Sophia throughout high school – as an athlete, as a student and as an active member of her community.

In addition to being a forward on the soccer team, Sophia was a midfielder on the lacrosse team.

She’ll play lacrosse when she heads to Georgetown University in the fall.

“I am so excited,” Sophia said. “I love the coach and the team.”

Sophia’s dad is a driving spirit when it comes to sports.

“My dad tries to build my spirit up and get me motivated,” Sophia explained.

“I’m competitive, so I was always trying to get the good grade. (My mom) was always pushing me to do the best that I could,” Sophia said. “She’s all about effort. So I tried really hard.”

A four-year member of the student council, Sophia praised her school.

“There are so many aspects that have helped me become the person I am today,” she said of Maryvale. “Everyone wants you to do your best.”

She said students have the opportunity to get to know their teachers.

“They’re there to help you along with anything you need. If you do have trouble, you can just go to them and they’ll help you through it,” Sophia said.

Sophia also served the community during her time at Maryvale. She participated in PACT (promoting active community testament).

The group raised awareness for Prader-Willi syndrome by holding a festival. The syndrome is the “most common genetic cause of life-threatening obesity in children,” according to the Prader-Willi Syndrome Association’s Web site.

She also attended events hosted by the social justice coalition.

“It’s just a great feeling to know that you can (help someone),” said Sophia, who hopes to continue reaching out to the community when she goes to Georgetown. “It’s satisfying.”