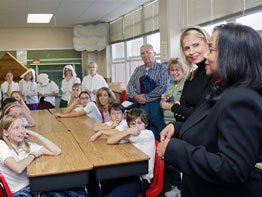 ST. LOUIS – Fifth-grade students at St. Paul School in Fenton experienced history coming to life in more ways than one this school year.

The students not only produced a play about Dred Scott, the slave who sued unsuccessfully for his freedom, but they also had a special guest attend their production – Lynne Jackson, the great-great-granddaughter of Dred and Harriet Scott.

The play, “Dred Scott – Legacy of Courage,” was written by their social studies teacher, Beth Clodius.

Jackson said she was “amazed and thrilled” when Clodius called her and told her about the play.

The teacher often writes short plays about topics her students are studying, including the 1904 World’s Fair, Charles Lindbergh and Benjamin Franklin. The students study the plays and perform them.

But this play was different.
“This is the first time the students have had the opportunity to meet a character they play and to meet a descendant of Dred Scott,” Clodius told the St. Louis Review, archdiocesan newspaper.

Jackson herself was written into the play and portrayed by a student.

The production was also timely since 2007 marked the 150th anniversary of the Dred Scott decision, which legalized slavery in 1857 in all U.S. territories before it was reversed. The Supreme Court ruling was the culmination of an 11-year legal battle by slaves Dred and Harriet Scott to be declared free, based on their long residence in “free” states that did not allow slavery.

The case has a local interest because two of the five trials were held at the Old Courthouse in St. Louis.

The Scotts ultimately lost since the U.S. Supreme Court declared Dred Scott a slave with no right to sue and stated that the federal government had no right to prohibit slavery in its new territories.

Clodius said the play was a good way to help students learn.

“The goal is to involve the students. The students become as knowledgeable as possible about the characters they play and teach the material to other students and groups,” she said, adding that the “students become the teachers. We all learn with these plays.”

The students agreed. Adam Gilmore, who played Dred Scott, said, “I think experiencing how they lived in the play is more of a learning experience than just sitting there with a book.”

“Me too,” said Annie Myers, who played Harriet and described her as “a really brave woman who can stand up for herself and fight for her freedom. She’s really courageous.”

The plays are done on a minimal budget. Clodius provided the costumes that were primarily reworked outfits sent in by parents. The art teacher designed the set and another teacher helped with research.

The students presented the play in the back of the classroom, as Clodius, Jackson and other guests including parents and the town’s mayor clustered in front of the room to watch. A question-answer session followed where students answered detailed questions about the Dred Scott decision.

Jackson also answered questions and showed the students laminated replicas of historic documents related to Dred and Harriet Scott. She presented Clodius and the students with a commemorative envelope with a picture of Dred Scott and the words from the U.S. Supreme Court decision, “They had no rights which the white man was bound to respect.”