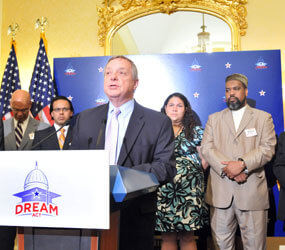 WASHINGTON – As the effort to pass the DREAM Act hits its 10th anniversary, churches, synagogues and mosques around the country will devote a September weekend to teaching their congregations about the faith-based reasons to work for its passage.

Sen. Dick Durbin, D-Ill., flanked by priests, bishops, rabbis, ministers and an imam, announced July 12 in a news conference at the Capitol that Sept. 23-25 will be DREAM Act Sabbath. Faith leaders said they and their fellows would devote time during or after worship services to explaining the legislation and offering testimony from young people who would be affected by it, all geared toward mustering legislative support.

The Development, Relief and Education for Alien Minors Act has been a perennial effort sponsored by Durbin. The version currently before the Senate, S. 952, has 34 co-sponsors.

It would apply to people who were brought to the United States before age 15, who have earned a high school diploma or the equivalent and are admitted to college or who enlist in the military. The bill includes a lengthy list of requirements, such as background checks and registering for Selective Service, before providing a six-year window during which the applicant is protected from deportation and may apply for permanent residency as long as they continue to meet the criteria.

Cardinal Theodore E. McCarrick, retired archbishop of Washington, said at the press conference that “these are Americans, for all practical purposes,” and that many DREAM Act supporters, who call themselves “Dreamers” risk deportation in order to advocate for the chance to become U.S. citizens through its provisions.

“Why would we not want to embrace their dedication, energy, talents, and courage – characteristics that have made our nation great? It would be to our detriment to forsake them.”

He said that speaking on behalf of fellow bishops, “we plan to promote the DREAM Act Sabbath.”

The Rev. Samuel Rodriguez, president of the National Hispanic Christian Leadership Conference, linked the effort to Scripture. “Christ himself admonished us to permit the little ones, the children, to come to him for the Kingdom of Heaven belongs to them.”

Rev. Rodriguez said Christ was committed to “the care and protection of the most vulnerable, especially children. To continue to punish these children is nothing less than anti-Christian, anti-American and morally reprehensible.”

Imam Mohamed Magid, president of the Islamic Society of North America, said as an immigrant himself he especially treasures the American value of welcoming the stranger. “We will stand together in solidarity … imams and clergy.”

Rabbi Lisa Gruschow of the Congregation Rodeph Shalom in New York, told of a couple she met for pre-marital counseling recently, both immigrants from the former Soviet Union who are studying to be doctors, one while getting an MBA first.

“The only difference between them and the Dreamers is a piece of paper,” she said. She herself is a Canadian immigrant, who studied for her naturalization test on the train to Washington that morning, she said.

Rabbi Gruschow said she thought of the many young students who are ineligible to apply for naturalization.

On the Jewish Sabbath, she said, a tradition which will play out in many congregations on DREAM Act Sabbath, is to pray for the world “not as it is, but as it should be.”

A version of the DREAM Act passed the House in 2010 but failed to get the 60 votes necessary to override a filibuster threat in the Senate. Even its supporters acknowledge passing it will be a hard fight in the politically divided Congress, but speakers at the press conference talked of bipartisan hopes.

Durbin and Sen. Michael Bennet, D-Colo., noted that the legislation has had bipartisan support in the past and that they hope the Sabbath effort will help draw Republicans back to it.

Bennet said that as superintendent of Denver Public Schools, he saw daily the effects of dashed hopes on high school students who lacked legal residency and its path to higher education and jobs. “In about ninth grade they’d recognize that opportunities would not be available to them.”