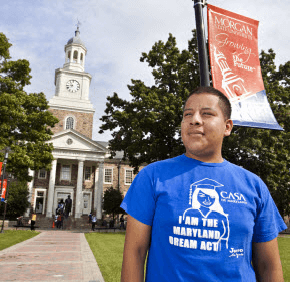 This is the third in a four-part series examining election-related issues.

“Fairness” is at the heart of their support for the Maryland DREAM Act, say the state’s Catholic bishops.

They are encouraging their flocks to vote for Question 4 on the Nov. 6 ballot – the statewide referendum on the Maryland DREAM Act, which would allow undocumented immigrant students who meet certain criteria to pay in-state tuition rates at Maryland State colleges or universities.

These students can currently attend these schools, but at out-of-state rates.

That difference is significant. At the University of Maryland, College Park, for example, annual in-state tuition is about $8,000, and out-of-state $24,000.

That gap is large enough to keep promising students from affording higher education, DREAM Act advocates say. Unlike their classmates who are citizens, undocumented students are not eligible for state and federal grants and loans.

“We consider it (the DREAM Act) a matter of affirming the dignity of these young people, who are here through no fault of their own,” Baltimore Archbishop William E. Lori told the Catholic Review. “Educating these young people and making them productive citizens of our country is something good – a source of strength for our country.”

He emphasized that message in a Sept. 30 letter to area Catholics, and encouraged them to learn the merits of the legislation, which passed the Maryland General Assembly and was signed into law last year.

The referendum prevented it from taking effect, and now Maryland voters will decide whether the DREAM Act should stand or be overturned.

A recent poll found that 60 percent of likely Maryland voters support the DREAM Act, with 26 percent opposed and 14 percent undecided, according to Educating Maryland Kids, a coalition working to protect the law.

The Maryland Catholic Conference, which advocates for public policy on behalf of the state’s bishops, is a coalition member, along with other faith-based, education, civil rights and labor organizations, including the Maryland State Education Association.

Under the DREAM Act, students must meet clear criteria to be eligible for the in-state tuition rate: they must attend a Maryland high school for three years and graduate, earn college acceptance, attend a community college for two years before transferring to a four-year institution, and promise to pursue citizenship when eligible.

Importantly, they – or their parent or guardian – must pay taxes for three years before eligibility, and continue to pay taxes during school, the reason advocates call it a matter of fairness.

Among those advocating for the law is Jesús, 20, who requested the Catholic Review not use his last name. A Catholic and former altar server at St. Michael in Fells Point, which recently closed, he is interested in attending Morgan State University and pursuing a career in media.

Most DREAM-Act-eligible students – or “DREAMers” – were brought to the United States as young children. Jesús was 5 when his parents brought him to Baltimore from Puebla, Mexico.

Shortly after arriving, he started first grade at a Baltimore public school. He graduated June 3 from Patterson High School with average grades and a love for literature.

Despite Jesús’ active school involvement, he was on the outside when it came to college applications.

While his friends were considering Towson University or University of Maryland College Park, his options as he – tongue-in-cheek – puts it, were Starbucks or MacDonald’s.

“What does the state want to do with a lot of high school graduates who can’t complete their higher education?” he asked.

The DREAM Act is important because many immigrant families do not have high incomes, he said. In-state tuition would put higher education within his reach, rather than leaving it financially impossible, he said.

DREAMers “want to give back to the community,” Jesús said.

Educating Maryland Kids’ website includes the aspirations of other DREAMers who hope to become doctors, genetics researchers and psychologists. A Kenyan immigrant who hopes to become a neuroscientist said he did not know he was undocumented until applying to college.

Only hundreds of Maryland students may meet the law’s criteria, Ford said. States with similar legislation report that it increased their student body size by less than 1 percent, she said.

DREAMers’ applications would be considered with the out-of-state applicant pool, ensuring that no Maryland citizen could be denied admission due to a DREAMer taking his or her spot – an often misunderstood aspect of the law, Ford said.

With the help of a new federal program, DREAMers now have an easier path to work after college as well. Launched Aug. 15, the Deferred Action for Childhood Arrivals program provides temporary visas to talented undocumented immigrant youths who came to the United States as children.

The Maryland DREAM Act is not the same as the DREAM Act first introduced in Congress in 2001, although they share a name – an acronym for Development, Relief and Education for Alien Minors.

The Catholic Church in America has a long history of providing education to those who would otherwise not have access to it, Chris Ross, MCC’s associate director for social concerns, explained on a recent panel in Baltimore.

In 1606, Franciscan missionaries opened a school in Florida to teach Christianity and farming. Two centuries later, they opened schools in California. In Maryland, St. Elizabeth Ann Seton opened a school for poor students in Emmitsburg in 1810, and Mother Mary Elizabeth Lange founded a school and women’s religious order for African Americans in the early 1800s, decades before African Americans would be admitted to the state’s public schools.

“The Catholic Church has always held education in high regard,” Ross said.

The same goes for immigrants, who have always comprised the U.S. church, Archbishop Lori said.

He called the law “pro-family” and “expressing the desire that we all grow and develop into being the human beings God has called us to become.”

Archbishop Lori tied this support to Scripture in the Sept. 30 letter. “Throughout the Old and New Testament, we are reminded that our faith continuously calls us to embrace the stranger,” he wrote.

Some DREAM Act opponents accuse it of rewarding illegal immigrants. The MCC addressed this concern after the DREAM Act was signed into law.

“We do not condone breaking the law, and fully recognize the legitimate concerns our state and country faces regarding illegal immigration,” the organization said in a statement. “These problems cannot be solved, however, by harshly denying the needs of those who live and work among us here and now, especially the young.” The measure affected those “who are making the right choices in order to lead productive lives,” it added.

Redemptorist Father Robert F. Wojtek, pastor of Sacred Heart of Jesus-Sagrado Corazón de Jesús in Highlandtown, said that the DREAM Act is important for the future of the country.

“This is not a free ride,” he said, a misconception he often hears.

Rather, he sees it as putting faith into action.

In his letter, Archbishop Lori also emphasized that Catholics’ “first allegiance” should be to the Gospel, not political parties.

Concern for one’s neighbor, the common good and protection for life should influence voters’ choices as much as self-interest, he said.

Part two of the series.

Part one of the series.