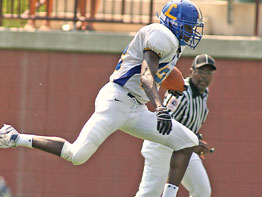 Looking ahead to the 88th meeting of two, top-level, local football teams this Thanksgiving for the annual Turkey Bowl, one wonders: Can the Dons make it five wins in a row?

Combine school pride with probable title honors on the line and the Loyola Blakefield football team sure plans on it.

When asked if five wins in a row bring added pressure to the mix, Loyola Head Coach Brian Abbott said, “You know, we always want to do well but it’s all about the seniors for us, and we want to make this a memorable year for them.”

In 2006, the Dons pressed the Calvert Hall College High School, Towson, Cardinals into a 26-0 defeat, taking one of the longest running competitions in history to new levels with a 46-game winning lead over Calvert Hall’s 33. The teams also have tied eight times along the way.

In addition to the pressure of the Turkey Bowl, the Loyola Dons are also in the hunt for another MIAA A Conference title. It’s imperative that the Dons, 2-1 as of Nov. 5, win their last two regular-season games in an effort to force a two and maybe three-way tie for first place.

The Dons have yet to face Georgetown Prep and Calvert Hall. Currently, the Gaels are perched in first-place at 4-1, waiting to see what McDonogh and Loyola do as the season winds down.

“The A Conference has no play-offs, but every game has a play-off atmosphere,” said Abbott. That could not be truer when the Dons face off against the Cardinals on Turkey Day, Nov. 22, at M&T Bank Stadium at 10 a.m. The game will again be televised on WMAR TV.

The Dons’ theme this season seems to be “getting better together.” And leading the charge for the Dons this season have been senior captains Tim Bolte and Bubba Harris.

Bolte, an academic whiz, translates his academic prowess right onto the field, giving him the responsibility of providing an extension of the coaching staff to the field. Bolte is a three-year varsity player and stands 6-foot-2-inches and 215 pounds, providing excellence at the linebacker slot and tight end position.

Abbott said that Bubba Harris, a four-year varsity player, has been a mainstay on the inside of the defensive set. At 6-foot-2-inches and 235 pounds, Harris is focused and experienced with a keen read on offensive plays as they develop.
Offensively, the Dons are led by junior Leon Kinnard at quarterback. Kinnard was banged up in the win over Gilman in late October and is suffering from some muscle strains in his hip, but Kinnard is a fighter and true competitor. Look for Kinnard under center again this year at the 88th meeting of Calvert Hall and Loyola on Thanksgiving Day.