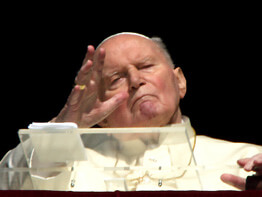 Dr. Renato Buzzonetti said Pope John Paul had a feeding tube inserted when he needed it in his final days and received an intravenous drip “right up until the end, without any interruption.”

He said the pope was never “without medical aid and assistance, as someone erroneously wants to insinuate.”

Dr. Lina Pavanelli, an Italian anesthesiologist who neither treated Pope John Paul nor had access to his medical records, argued that when doctors outfitted the pope with a feeding tube a few days before his death, it was too late to help him.

She concluded that the pope himself must have refused such treatment earlier, and that as a result he suffered from a serious “nutritional deficit.” She said she reached her conclusion on the basis of the pope’s TV appearances, press reports and comments from the papal medical team.

The allegation, first made in a magazine article, was repeated at a Rome press conference Sept. 26, where Dr. Pavanelli said the pope’s treatment, or lack of it, constituted “a real act of euthanasia, according to the criteria established by the Catholic Church.”

Dr. Buzzonetti rejected the accusations in an interview with the Rome newspaper La Repubblica.

Dr. Buzzonetti said the nasal feeding tube was permanently applied March 30, 2005, four days before the pope’s death, when he was no longer able to nourish himself by eating and drinking. Other Vatican sources have said the feeding tube also had been used on a temporary basis several times prior to that date.

Dr. Buzzonetti said the phrase the dying pope is said to have whispered to one of the Polish nuns at his bedside – “Let me go to the house of the Father” – should not be understood as a refusal of medical care.

“It was certainly not a manifestation of renunciation or a form of premature surrender of life, and much less an invitation to his doctors to ‘pull the plug’ or interrupt assistance, as if an indirect choice of euthanasia,” he said.

He said the pope’s own decision not to return to the hospital during the last few days of his life was made with the knowledge that he could receive complete and specialized medical treatment in a facility set up inside his apartment.

Pope John Paul’s final days, Dr. Buzzonetti said, demonstrated that the pope “never gave up” and showed people “how deeply he loved life, right up to the last instant.”

The renewed discussion about the late pope’s medical treatment came in the wake of a recent Vatican document that said it was generally a moral obligation to provide food and water to patients in a persistent vegetative state.

The principles underlined by the document apply to patients who are comatose but with regular metabolic functions and not those suffering from a terminal shutdown of organ functions, which the pope experienced as a result of worsening illness and septic shock.

Italy, meanwhile, has been involved in its own debate about assisted suicide. Last December, Piergiorgio Welby, who was paralyzed and kept alive by a breathing machine for nine years, had the device turned off and died. The Diocese of Rome refused Mr. Welby a church funeral, saying he had committed suicide.

Mr. Welby’s widow was at the Sept. 26 press conference with Dr. Pavanelli. She suggested that the pope’s feeding tube was inserted only after he had lost the capacity to oppose this kind of treatment.