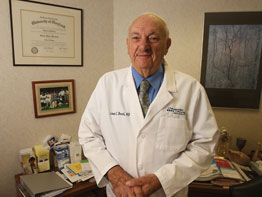 Wherever life has taken him, from a boyhood in Hamilton to studying under the Jesuits to serving as a U.S. Air Force surgeon in South Vietnam and then establishing a medical practice at Franklin Square Hospital, a strong conscience has accompanied Dr. Louis C. Breschi.

His dedication to an ethical approach is the reason the Catholic Medical Association will hold its 77th annual Educational Conference in Baltimore Oct. 9-11.

An organization of Catholic physicians in the United States and Canada, the CMA takes its annual event to the hometown of its president-elect. Dr. Breschi was elected to that position a year ago, so the CMA will gather for the first time in Baltimore.

“He brings a long record of several decades of involvement as a Catholic physician who has brought a focus to ethical questions that many of us face,” said Dr. John Brehany, the executive director of the CMA.

The CMA presidency is a natural step for Dr. Breschi, a 72-year-old, semi-retired urologist.

Dr. Breschi and his wife Jacquelyn are the parents of five and grandparents of 15. The couple have been parishioners of Immaculate Conception in Towson since the early 1970s. Prior to that, they raised their brood as Air Force brats, as Dr. Breschi rose to the rank of lieutenant colonel.

Outlining his grounding, Dr. Breschi mentions the influence of Aristotle and St. Thomas Aquinas, and an education that began at Loyola Blakefield and continued at Loyola College in Maryland.

“In the 1950s and ‘60s, there was no ethics component,” Dr. Breschi said of his medical studies. “My best training came at Loyola College one semester, when the teachings of a priest made a strong impression.”

By the time he became the first chairman of the Maryland State Medical Society’s ethics committee in 1979, Dr. Breschi already had a reputation for weighing in on matters like life support.

Seeking like-minded professionals, Dr. Breschi joined the CMA in 1996 and founded its Baltimore Guild. Near the end of his medical career, he wants to offer guidance to younger professionals, citing examples of a physician who is steered by the bottom line or a pharmacist asked to supply the morning-after pill.

“For many young physicians, conscience takes a back seat to what will generate a larger practice,” Dr. Breschi said. “We’re not going to be judgmental, we’re just trying to tell them what the church really teaches. They have to come to their own conclusions.

“The major issue we’re facing in all areas of medicine is conscience. The challenge to us as physicians, is to not do things that we think are morally wrong when we’re being forced by the state, by the federal government, to do so. That’s the big thing.”

The theme of the 2008 CMA conference is “Theology of the Body: Modern Challenges to Health, Conscience and Human Development.” Lecture topics will include aging and accepting one’s limitations.

“In recent conferences, the focus has been on reproduction and women’s health,” Dr. Breschi said. “That was necessary, but there are many other issues out there that are equally important.”

Attention will also be given to the Archdiocese of Baltimore and its history.

“What distinguishes this from every other medical conference is that we have Mass, adoration, the rosary woven into the program,” Dr. Breschi said. “What’s new is the Baltimore component. We’re the first diocese, the first archdiocese, the first cathedral, a lot of very holy men and women spent their lives here.”