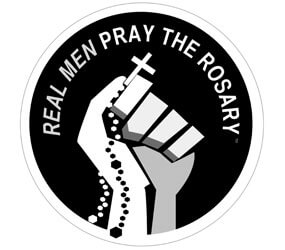 McALLEN, Texas – Throughout his childhood, David Calvillo’s mother urged him to pray the rosary but he admits the recommendation went in one ear and out the other.

“I thought the rosary was for old ladies and funerals,” Calvillo said.

His mindset began to change when he attended a retreat at the Benedictine Sisters of the Good Shepherd Monastery outside of Rio Grande City – reluctantly, Calvillo’s wife Valerie pointed out.

“He was a bit hesitant,” Valerie Calvillo said. “He didn’t know what to expect.”

Going to the retreat proved to be a life-changing experience.

“As we were praying the rosary at the retreat, I saw something that I had never seen before,” David Calvillo said. “I felt this incredible connection.”

Before he left the retreat, Calvillo stopped by the gift shop and bought a copy of the book, “The Secret of the Rosary” by St. Louis de Monfort, for each man who attended the retreat.

Over time, through his research, prayer, retreats and fellowship with other men of faith, he developed a deep appreciation for the rosary. He was finally sold on the notion that the rosary was indeed a prayer for men, a prayer for all Christians.

After exploring ways to promote the rosary, Calvillo formed an apostolate called Real Men Pray the Rosary. The apostolate encourages praying the rosary in several ways: through education via a variety of channels, by physically making rosaries during rosary-tying events and finally, by distributing the rosaries.

Calvillo created a logo with a tough-looking hand clutching a rosary, which is now the face of the apostolate.

He said the inspiration for the logo was a man named Alex Gamboa Jr., a parishioner at St. Joseph the Worker Church in McAllen.

“I used to see him walking around with the rosary around his hand and I thought it was powerful to see a strong man doing that,” Calvillo said.

Gamboa said he wraps the rosary around his hand during trying times and during times of intense prayer. “Pray for me” is a phrase Gamboa hears often because friends and family members know he takes the request seriously.

Calvillo also created a presence online through the Web site, www.RealMenPraytheRosary.org, and with a page on Facebook, a social networking site.

“I thought if we could get 200 members from the (Rio Grande) Valley, we could consider the Facebook page a success, but it just exploded,” he said. “Before we knew it, we had more than 4,100 members from all over the world.”

Calvillo recalled one particular day when he started a virtual rosary. By the time it was completed, it was pieced together in 13 languages.

Rosary-tying events draw the faithful of all ages from different parishes who gather together for the common goal of making rosaries. They are fashioned from colorful twine and metal crucifixes.

Each rosary is as unique as the person who ties it. No two are alike.

“I think these rosaries have more significance than store-bought rosaries,” said Tito Salinas, a parishioner at St. Joseph the Worker. He and his wife, Norma, are regulars at rosary-tying events.

“They may not be made perfectly, but they are made by someone who cares,” he added. “I think knowing that the rosary came from somebody who took the time and effort to put it together motivates the recipient to pray it more often and to appreciate it.”

During a recent rosary-tying event at Calvillo’s law office, dozens of people made rosaries for the troops serving overseas. The event also promoted fellowship among local Catholics, some who already knew each other and some who didn’t.

The rosaries are given out at retreats, confirmation classes and wherever else they are needed. More than 100 rosaries were completed for the troops and they will be distributed through servicemen and servicewomen with ties to the Valley.

Gamboa said he hopes the popularity of the apostolate “is only the beginning and that it will expand parish life.”

“I hope we will have more lectors, catechists and eucharistic ministers through this and of course, better mothers and fathers,” he said.