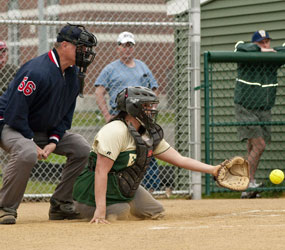 CHICOPEE, Mass. – A few weeks ago, a friend came to Gina Gilday’s Elms College dorm room and asked to borrow a pair of socks.

That’s not an unusual occurrence among juniors in college. However, Gilday does not own any socks because she was born without legs.

Gilday’s friends seem to forget that fact as they watch the 21-year-old in the classroom, dorm or on the softball diamond.

“A lot of people see her as, ‘Oh, she has no legs, and that must be hard.’ I tend to forget that she doesn’t (have legs) because I’ve never heard her complain once in her life about it,” said teammate and friend Ally Graffum.

Cheryl Condon, softball coach at Elms College, recalled that she was a bit surprised and anxious when she heard the news that a player with no legs wanted to join her team.

“For every one of us who doesn’t think we can do something because it gets a little hard, I think Gina inspires all of us every day to keep on keeping on. She leads us,” said Condon.

Gilday’s love for softball came early in life. She started with T-ball and continued playing.

“I remember telling my mom that I was going to try out for the softball team” in high school, she said, adding that her mother was nervous but encouraged her to go ahead.

“My parents, they are amazing. And they always brought me up to have strong faith and believe that God gives you certain things to deal with because you can handle them. He would never give you anything you can’t handle,” said Gilday, who has bilateral lower limb deficiency.

Gilday’s lack of limbs is not much of a hindrance for her position as a catcher. Instead of squatting behind home plate, she hops out of her chair and scoots to the spot.

Batting is a challenge. Without her prosthesis she has a very small strike zone. She could bat that way and did in high school.

“However, it’s not fair to the other team because I am so low to the ground,” she said. “And if I did hit it, I would have to crawl to first and then have a pinch runner. I would really have to hit it pretty far because I am not very fast,” she said.

Gilday said she wears her artificial limbs for special occasions. “When I wear them I get really tired and I am not as energetic as I normally would be,” she said.

Asked if she ever feels down, she said, “I think everybody has a dark moment, but I actually, surprisingly, didn’t have a lot. I think I have just really lucked out with the people I have in my life.”

She especially credits her mother, Eda, with supporting and guiding her.

“She would tell me you can go one of two ways. You can be OK with it and do something with yourself or you can sit back and feel bad for yourself,” said Gilday.

Eda Gilday’s face lights up when she begins to talk about the youngest of her four children. Gina’s siblings are Candace, 28; Ricky, 25; and T.J., 23.

“When Gina was born it was a very hard time,” she said.

“I was so down, and I told (Father Walsh) that I don’t know if I have any faith. And he said this is the time your faith should become the strongest, and your faith will carry you. And it did,” she said.

Gina Gilday said her parents “raised me to focus on what you do have, not on what you don’t have. So I just kind of stayed with that. I still have my voice. I can still talk. I can communicate. I can hear. I can see. I have my arms. I work with what I have and go with that.”

She described the Elms College community as “a big family” that has boosted her confidence. It has become a new home for her.

When Gilday is not playing ball or studying, she volunteers at Homework House in Holyoke and works in customer relations at Peter Pan Bus Lines. She drives a car with hand controls and wants to be a high school teacher.

But for now, she just enjoys suiting up for her softball games and sharing a laugh and a cheer with her fellow Blazers.