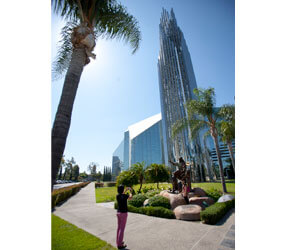 ORANGE, Calif. – The Diocese of Orange has upped its bid to buy the Crystal Cathedral complex in Garden Grove from $50 million to $53.6 million.

Once the home church of the Rev. Robert Schuller, a noted television preacher, the cathedral property was put up for auction earlier this year as part of the Crystal Cathedral Ministries bankruptcy proceedings.

News media in California reported that a bidding war had begun, prompting the Orange Diocese to increase its offer. Other bids in the $50-million range have come from David Green, a prominent evangelical who heads the nationwide arts and crafts retailer Hobby Lobby, and Chapman University, a private liberal arts university in Orange.

Meanwhile, the board of Crystal Cathedral Ministries, or CCM, announced it has no plans to sell the property and has launched a fundraising drive to try to save it. But the creditors committee, which is part of any bankruptcy proceeding, must review the bids and present them to the bankruptcy court.

According to its Aug. 9 announcement about increasing its bid, the Orange Diocese said its goals remain the same: “to see creditors satisfied, adequately provide for all constituents and stakeholders, and accommodate the Diocese of Orange’s need for a new cathedral, while respecting the CCM ministry and its legacy.”

The Orange Diocese said that if it has the winning bid, the $53.6 million would be paid in cash at closing and if Crystal Cathedral Ministries wanted to remain on the site for a period of time, $3.6 million of the funds would be reserved to pay the organization’s rent for up two years.

“This sanctuary should remain a place of worship and remembrance, nothing less,” said Orange Bishop Tod D. Brown. “Further, the diocese itself would have access to a much-needed cathedral complex in a shorter time, and at significantly lower cost, than original construction would demand.”

The cost of building a new cathedral for the Orange Diocese has been estimated at $100 million.