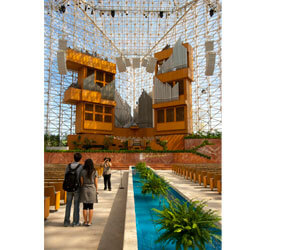 ORANGE, Calif. – A bankruptcy court judge has ordered the sale of the Crystal Cathedral and its nearly 31-acre campus in Garden Grove to the Catholic Diocese of Orange for $57.5 million.

U.S. Bankruptcy Court Judge Robert N. Kwan’s Nov. 17 ruling confirmed a decision by the Crystal Cathedral Ministries board of directors to accept the diocese’s offer over a competing bid from Chapman University, which recently raised its offer to $59 million.

The Crystal Cathedral, founded by the Rev. Robert H. Schuller and the site of his nationally broadcast “Hour of Power” TV program, will lease back the church and other buildings for up to three years.

Designed by architect Philip Johnson and dedicated in 1980, the church will eventually become the cathedral for the Diocese of Orange, which is the nation’s 10th largest diocese in terms of Catholic population.

“We sincerely regret the difficult circumstances Dr. Schuller and his ministry have encountered,” said Orange Bishop Tod D. Brown in a news release following the bankruptcy court ruling. “Those challenges have now enabled the Diocese of Orange to protect this wonderful structure as a place of worship and will soon provide our Catholic community with a new cathedral, pastoral center, parish school and more.

“Despite these wonderful results, we are nonetheless saddened by the events that led us to today’s award and offer our respect to Dr. Schuller and his ministry,” he added.

The church, affiliated with the Reformed Church of America, filed for bankruptcy in October 2010, claiming more than $50 million in debts.

In a videotaped message to the Crystal Cathedral congregation, the Rev. Sheila Schuller Coleman, executive director of ministry and mission at the cathedral founded by her father, said there were “many, many challenges to the Chapman plan,” including lease-back costs that were “way too high” and a lack of space for children’s religious education, ministry to teens and adult fellowship meetings.

But she said the congregation is “still praying for a miracle and believing in a miracle,” adding that “until escrow closes, God can still do a miracle.”

If the congregation has to move at the end of three years, “we will believe that God has moved us to the place he needs us the most,” Rev. Coleman said.

In its news release, the diocese said “critical design upgrades” would be needed “before the church can be used as a Catholic cathedral.”

In addition, it said, “a diocesan pastoral center will be established on the Garden Grove campus and nearby parish school and church eventually transferred to the new location.”

Bishop Brown said in a Nov. 17 letter to priests and laity of the diocese that the sale would give the diocese “a cathedral large enough to meet our present and anticipated needs.” As currently configured, the church seats 2,800 people.

“I was surprised and gratified that so many people told me they were hoping we would be successful,” the bishop added. “It is clear by all the interest focused on our efforts that many of our laity understand the need for and importance of such a cathedral for Catholics in Orange County.”