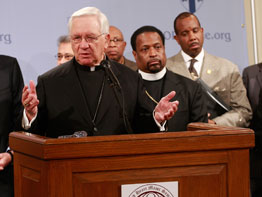 “There is great concern for the countless individuals and families who are under great stress because of the uncertainty of our economy,” Cardinal Maida said at a media briefing following the meeting.

“They need to hear words of hope and encouragement. This is a time to stand in solidarity with all who are suffering the loss of jobs or homes, and all those who are anxious about what will happen in the future to the automobile industry in metro Detroit,” he said.

Cardinal Maida said both business and labor leaders had expressed fear of what could happen if there is no government action. “The alternative is not only unwise; it is unthinkable. If nothing is done, one can only imagine what would happen to all of us who call this corner of Michigan home,” he added.

The 11 religious leaders represented local Catholics, Anglicans, Protestants, Jews and Muslims. Cardinal Maida said they also had discussed various ways each faith community has been responding to requests for assistance to people in need – a situation exacerbated by the economic crisis – and how they can work together on programs and projects.

Besides bringing together the representatives of the various faith communities, Cardinal Maida also released to the press the text of a pastoral letter on the economy, “Christ Our Hope,” to be distributed in all 290 parishes and missions of the archdiocese the weekend of Dec. 6-7. It was printed in the Dec. 5 issue of The Michigan Catholic, the archdiocesan newspaper.

In it, the cardinal offered hope and encouragement to those suffering hardships, and urged all local Catholics to show charity and solidarity to others in this time of difficulty.

The religious leaders’ meeting took place as the auto companies’ top executives returned to Washington to plead their case before a U.S. Senate panel.

With Michigan’s U.S. senators and representatives already committed to supporting assistance to Detroit’s automakers, the religious leaders pledged to work through their colleagues in other states to convince other lawmakers of the urgency of prompt action.

Bishop Charles Ellis, pastor of Greater Grace Temple in Detroit, pledged to work through his denomination, the Pentecostal Assemblies of the World, which has 2,000 congregations.

Rabbi Daniel Syme, of Temple Beth El in suburban West Bloomfield Township, remarked on the discrepancy in the federal government’s treatment of the auto companies – whose employees are mostly blue-collar workers – as opposed to Wall Street firms and their white-collar workforces.

The Rev. Edwin Rowe, pastor of Central United Methodist Church in downtown Detroit, said, “You can beat up the auto company CEOs all you want, but the people who are going to lose their jobs are the people at my door asking for help.”

He also suggested white racism might be involved in some lawmakers’ reluctance to help the Big Three automakers, as Detroit is perceived as a black city.

Congress was considering various options to help the automakers but no decisions have been reached.

In his pastoral letter, Cardinal Maida offered “some pastoral insights and suggestions about how we might prepare to celebrate Christmas this year when economic conditions are so grim.”

He noted the loss of jobs, homes, pensions and personal investments and the fact that the automobile industry, “our primary employer,” is suffering “major challenges.”

He included “prayerful reflections” for readers to consider, such as:

– “When I make decisions about economic matters for myself and my family and my co-workers, in what ways do I take into account the larger common good?”

– “How might I show charity to others immediately around me?”

– “Do I believe in the power of prayer and that in many ways prayer is our greatest resource?”

But even when people do not have “the economic means” to give to others, Cardinal Maida said, “every one of us has the ability to pray and find a way to be of service.”