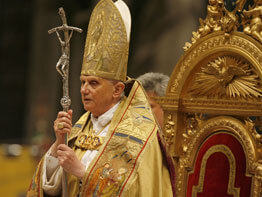 WASHINGTON – To answer the question that is increasingly being asked of officials with the archdioceses of Washington and New York – and pretty much anyone else who works for the Catholic Church in the region – you can’t yet get tickets to any events during Pope Benedict XVI’s visit to those cities in April.

The two archdioceses don’t expect to have information about how to get tickets for the few public events of the April 15-20 visit until after the first of the year. And what tickets are available will likely be distributed according to formulas that will give priority to people from Washington and New York and neighboring dioceses.

The Vatican announced Nov. 12 that the pope will arrive in Washington April 15, spend the next two days there, move on to New York April 18 and depart for Rome the evening of April 20.

He will address the United Nations; participate in events with interreligious and ecumenical religious leaders; visit the White House and ground zero, the site where the World Trade Center stood; meet with U.S. bishops and representatives of Catholic education institutions; join a rally for youths and seminarians; and celebrate Mass for priests, deacons and religious of New York.

However, most of those activities will be invitation-only. Unlike previous papal visits, when Masses were held at the National Mall and Central Park – wide-open venues with space for hundreds of thousands of people – opportunities to see Pope Benedict will be more limited.

Pretty much the only chances the general public will have will be at Masses at the Washington Nationals’ new baseball stadium, with a capacity of about 45,000, and Yankee Stadium in New York, which has a capacity of perhaps 65,000.

The youths and seminarians rally at New York’s St. Joseph’s Seminary also is listed as a public event, but Joseph Zwilling, communications director for the New York Archdiocese, told Catholic News Service the 15,000 to 20,000 spots will be filled primarily with people from the New York region and some of the approximately 5,000 seminarians in the country.

All other papal events will be closed to anyone who isn’t specifically invited, said Zwilling and Susan Gibbs, communications director for the Washington Archdiocese. Invitations and plans for those events are being handled by various organizations including the U.S. Conference of Catholic Bishops, the Archdiocese of New York, the White House and the United Nations.

The New York Archdiocese has basic information about how tickets will be handled on its Web site: www.archny.org. It notes that tickets to the stadium Mass will probably be distributed through parishes; and tickets to the youth rally will be distributed by Catholic schools, youth groups and religious education programs.

Gibbs told CNS a similar strategy will probably be used for tickets to the Mass at the Nationals’ stadium. She said she expects information to be released soon about how the tickets will be allocated.

Zwilling said some seats for the Yankee Stadium Mass will be allotted for people from the three U.S. archdioceses that along with New York are celebrating bicentennials in 2008 – Louisville, Ky., Philadelphia and Boston. He said another batch of tickets will be set aside for the Archdiocese of Baltimore, which was the original see in the United States.

How tickets are distributed by other dioceses will be up to them to decide, he said. However, applicants for Mass tickets will have to provide name, address and other information and must show an ID to be admitted to the stadium, according to the archdiocese’s Web site.

The tickets will be nontransferable, it notes, warning that any tickets for sale through brokers or Web sites are fraudulent.

The Washington Archdiocese has not yet settled on its procedures, Gibbs said, but they likely will be similar to New York’s. The archdiocese has already received hundreds of requests for tickets from individuals, tour companies and parishes.

“We’ve heard from tour companies that are planning pilgrimages, from youth groups, from individuals wanting 27 tickets,” she said. Others are a bit audacious, like those who have asked whether their season tickets to the Nationals baseball games entitle them to use those seats for the papal Mass, she said. (They don’t.)

For now, said Gibbs, all the requests are getting the same response: letters explaining that nothing has been determined, and that opportunities to see Pope Benedict will be limited.

Also yet to be decided in both cities is whether the pope will have a motorcade route where people may line up for a chance to see him, said Zwilling and Gibbs.