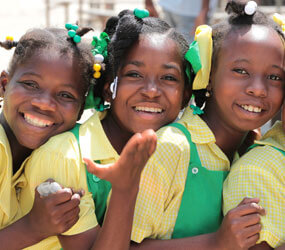 PORT-AU-PRINCE, Haiti – Carefully eying four round legs of what were to become part of a cabinet, Isaac Collin was making sure his handiwork aligned just right.

Soon the cross supports and side panels would be pieced together. Add wood stain and a couple of coats of varnish and Collin’s cabinet will be ready for someone’s home.

Collin was among a handful of carpenters and cabinetmakers working in what was left of the enormous two-story vocational training center at the Salesian-run National School of the Arts and Vocations.

One side of the woodworking workshop opened to the outside. It and a similar work area on the second floor were the building’s lone wing that was spared by the Jan. 12, 2010, earthquake.

Collin enrolled in the vocational program in October. He said he was pleased that the program continued after such a disaster.

“This gives me something to be very successful at,” Collin said during a brief break March 14. He said he hoped to be able to start his own cabinet-making business some day with the skills he is learning.

The school opened in 1935 in a neighborhood known as La Rouge, or the Red. The school is known across Haiti by its Creole acronym, ENAM, and has gained a reputation for producing some of the best-trained workers in the country in fields such as electrical wiring, welding, education, tailoring, masonry and automotive repair.

In addition to the vocational program, the campus is home to the Father Bohnen Little Schools for primary school-age students and an orphanage for children found abandoned or lost on Port-au-Prince’s dusty streets.

Fourteen months ago, the grounds were a desperate scene of trauma and chaos. Virtually every building collapsed during the cataclysmic earthquake. Classes still were in session, just minutes away from dismissal, when 35 seconds of shaking began. The death toll reached 250, including students and adults, said Salesian Father Gerald Jeannot, ENAM’s director.

Near the center of the compound, a shade garden now includes a small cemetery where 30 students are buried. An 85-year-old Haitian-born Salesian brother was among the dead. Wreaths of plastic flowers and grave markers – from simple to elaborate – stand in their honor.

Father Attilio Stra, the school’s previous director, was buried under rubble for six hours until rescuers reached him. He was hospitalized for weeks. Today he serves the Salesian order in Cap-Haitian in northern Haiti after a long period of recovery in the Dominican Republic and Italy.

Father Jeannot said it took months for the campus to be cleared of debris. Work crews since have rebuilt a 20-foot concrete-block wall around the compound and reinforced it to withstand future earthquakes. About 15 temporary classroom structures made from plywood, two-by-fours and topped by corrugated steel have replaced the old buildings.

Students still have a “tendency to run” when a large truck rumbles by the school, vibrating the makeshift structures, Father Jeannot said.

Cramped classrooms and the loss of teaching aids have forced teachers to find new ways to teach youngsters. In the first-grade classroom of Astrude Pierre, 65 girls followed her lead by loudly pronouncing Creole sounds as they shared books salvaged from the rubble.

In a neighboring structure, students in Fanor Ramson’s introductory woodworking class learned how to use a handsaw and miter box to cut framing. A lone box and a single saw were being used by a dozen students.

Father Jeannot knows the current educational setting falls short of what the Salesians are accustomed to offering. The emphasis now is on doing the best work possible under trying conditions. Everyone, he said, continues recovering from the earthquake.

“Sometimes if a big truck passes by, some students have a tendency to run,” he said.

Leaders of the Salesian order in Rome have made rebuilding ENAM its top priority. Preliminary plans call for an entirely new campus so the educational and vocational offerings can return to their prestigious level.

The estimated cost is $32 million. Funders are being sought for various phases of the multiyear project.

Meanwhile, a pile of white cement rocks two feet deep and 30 feet around is all that remains of one of the buildings where children once laughed and played and learned. A crew of about two dozen workers prepared the rubble for removal. One worker set some of the debris afire, sending a column of black smoke toward the cloudless blue sky – almost an offering in memory of the dead.

“Life is fighting,” Father Jeannot said. “We have hope to help young Haitians to grow up.”

Donations can be sent to Salesian Missions, 2 Lefevre Lane, New Rochelle, NY, 10801, with the notation ENAM School; or donate online at www.salesianmissions.org; or call 914-833-8344.