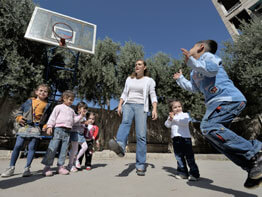 DAMASCUS, Syria – Refugees from Iraq are not going home any time soon, despite Iraqi government enticements, say church officials and others who work with the exiles in the Middle East.

“Especially for the Christian refugees, it simply isn’t safe to go back home now. There’s no one to protect them, and so they are afraid to go back,” said Auxiliary Bishop Joseph Absi of Damascus, a Melkite Catholic.

Iraqi embassies throughout the Middle East have launched a campaign to lure refugees back home, promising economic assistance and help recovering homes and other properties lost in the country’s violence and chaos.

“Although the situation isn’t perfect in Iraq, life isn’t exactly perfect for the refugees here in Syria. Their resources have run out and their options are limited. It’s time to go home,” said an official in the Iraqi Embassy in Damascus who asked not to be named.

“The refugees are well-informed about the situation back home. They get news every day from relatives who text them or call them. They know what’s going on, and there aren’t many who want to go back,” said Philippe Leclerc, deputy representative for the U.N. High Commissioner for Refugees in Syria.

Citing problems with security and the lack of basic services such as electricity and health care, Mr. Leclerc said conditions in Iraq would not allow for a massive return of refugees.

Yet as their savings continue to dwindle, the refugees face even harder choices. They are not allowed to work, but many nonetheless labor in the informal economy. That can be risky. Syrian authorities’ August arrest of 24 Iraqis for working without permits sent a chill through the refugee community and pushed many to rethink their future.

“It’s not our role to tell them to return home or not, but it would be dangerous for the refugees to gamble with returning home just because their resources have run out here,” Mr. Leclerc said.

According to a church official in neighboring Lebanon, refugees there are not looking back.

“The refugees who came in past years arrived with a hope of someday returning home, but the ones arriving now don’t even want to think about returning,” said retired Gen. Michel Kasdano, coordinator of the Chaldean Catholic Church’s ministry with Iraqi refugees in Lebanon. “And those who have been here awhile now want to leave for somewhere else. Their savings have run out, so their children have to go to work instead of to school. They’re developing chronic health problems because of the pressure and the increasing family tensions.”

The burgeoning needs of refugees for food, housing, health care and education far surpass the capability of the U.N. system to respond. Mr. Leclerc said diplomatic efforts had been made to get the Iraqi government to use a fraction of its oil revenues to help with heating fuel subsidies, for example, but he said those efforts had gone nowhere.

Church officials generally praise the Syrian government for its policies toward the refugees, but a religious leader in the northern Syrian city of Aleppo said that as the Syrian economy suffers – part of the global economic crisis – refugees will pay an inordinate price.

“The refugees are received well in Syria, but when there are problems they become easy scapegoats. People can’t complain aloud about the government, so they blame the Iraqis for their woes,” said Chaldean Bishop Antoine Audo of Aleppo.

Bishop Audo has become an outspoken defender of the refugees, and his church provides educational and other services to some 900 Iraqi refugee families living in Aleppo.

The bishop said that even if fighting were to cease in Iraq, only 15 percent of the refugees would want to return home. A few would try to stay in Syria, he said, but the rest want to be resettled in Europe, North America or Australia.

That desire to leave the Middle East creates a problem for church leaders who worry about the shrinking Christian presence throughout the region. They want their flock to be safe, but they also do not want them to leave.

“The church here has been very supportive of the refugees, but ultimately they want us to go back home. The problem is we don’t want to go back,” said Rana Ramzi, a refugee in Beirut, Lebanon, whose husband was killed in February while working for the Chaldean Archbishop Faraj Rahho of Mosul.

After urging people to resist paying money to the protection rackets that have sprung up throughout Iraqi cities, Archbishop Rahho was kidnapped Feb. 29 and later was found dead.

An official with Catholic Relief Services, the U.S. bishops’ international relief and development agency, acknowledged the bind in which church leaders find themselves.

“If they can keep their people in the region, in the Arab world, then church leaders feel they’ll come back home to Iraq once the situation permits. But once they go to London or farther, they’re gone for good,” said Mark Schnellbaecher, CRS regional director for the Middle East.

A Catholic leader in Lebanon said the international community needs to focus less on resettlement and more on finding ways to keep refugees close to home.

“If you want to do something for our people, help the people inside Iraq. Don’t resettle them elsewhere. They need jobs and security and protection so they won’t feel they have to leave,” said Chaldean Catholic Bishop Michel Kassarji of Beirut.

“Everyone tells me they are scared, that they can’t find a job, that they want to leave. But it’s our mission to stay in this land. We’ve been here since before the time of Jesus. If everyone leaves, the Middle East will be like a desert without Christians. So I encourage them to stay. But we are a poor church in Iraq, thus it is the mission of the whole world, especially America, to make sure people can stay,” he said.