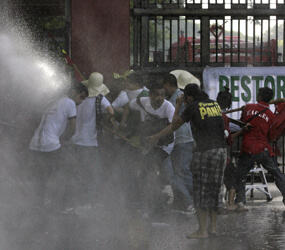 QUEZON CITY, Philippines – Church leaders criticized firefighters’ use of water hoses to disperse demonstrators, including Auxiliary Bishop Broderick Pabillo of Manila, at a rally outside Congress.

Security guards and police officers also tore down tents demonstrators were setting up outside the congressional building northeast of Manila, reported the Asian church news agency UCA News. No one was injured during the May 25 incident.

The day after the march, Jaro Archbishop Angel Lagdameo, president of the Catholic Bishops’ Conference of the Philippines, condemned the use of water to disperse the marchers. He said Congress security personnel could have talked with the protesters to sort things out.

“No one deserves to be dispersed like that, especially when all citizens have the right to air their views,” Archbishop Lagdameo said on church-run Radio Veritas 846.

Eight session days before Congress was scheduled to recess, Bishop Pabillo marched with a crowd of 3,000 – including priests, nuns, farmers and trade unionists – on the House of Representatives to persuade legislators to approve land reform legislation. The bill would allot the equivalent of $3.1 billion to a land reform fund created by the Comprehensive Agrarian Reform Law for buying land from private landowners and distributing it to qualified tillers.

After failing to set up camp near the gate, the protesters retreated to a nearby truck, which they used as a stage. There, Bishop Pabillo asked why they were sprayed.

“Last December, we put up a tent in that same place during our hunger strike,” the bishop told the crowd, his hair and shirt soaking wet.

The prelate said he was still trying to talk to the head of the security team when firefighters turned the water on them.

The congressional security chief later told UCA News the protesters were dispersed because they destroyed a temporary fence while trying to rush into the grounds.

The Philippine bishops consider the distribution of agricultural land to landless farmers as vital to poverty reduction.

In his May 18 pastoral statement on agrarian reform, Archbishop Lagdameo reminded legislators that God made the earth for all people “so that all created things would be shared fairly … under the guidance of justice, tempered by charity.”

The demonstrators also assembled at St. Peter’s Church not far from the House of Representatives building for Mass concelebrated by Bishop Pabillo, Bishop Honesto Ongtioco of Cubao and seven priests.

In his homily, Bishop Pabillo said development goes beyond building structures and big revenues; it must improve lives of poor people. He led the congregation in praying for lawmakers to “soften their hearts” and pass legislation.