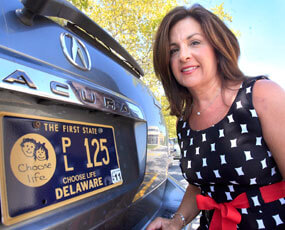 WILMINGTON, Del. – Delawareans now may show their pro-life sentiment when they drive their cars, as the first batch of “Choose Life” specialty license plates has been delivered.

“When I saw that plate – it’s hard to describe that feeling,” Choose Life organizer Jim Cordie of Dover said about the arrival of his license plate in the mail in late August. “It was some type of relief. There had been uncertainty.”

Choose Life Delaware still lacked 19 of the 200 applications for the plates required by the Department of Motor Vehicles to begin production when legislation that would have placed a three-year moratorium on specialty plates was introduced to the General Assembly.

The proposal, which languished in the Senate Executive Committee until the legislative session ended June 30, increased the stress on Cordie, who had worked more than three years to acquire the plates. Now, he believes the proposed moratorium pushed supporters to turn in their applications.

To date, 230 applications have been accepted and forwarded to the Department of Motor Vehicles.

When Deborah Oleck, a learning specialist at Archmere Academy in Claymont, heard about the moratorium, she quickly finished the application she’d had for several months. She put her new license plates on her car in early September.

“I’ve always been pro-life,” she told The Dialog, newspaper of the Diocese of Wilmington.

Delaware becomes the 23rd state to have Choose Life plates since the effort began in Florida in 2000. The plates have been offered in Maryland since 2003.

The Delaware plates carry the letters “PL,” for “Pro-Life,” Cordie said. The Department of Motor Vehicles requires a letter or letters before numbers to avoid confusion with the state’s numeral system for its standard tags.

“We would have preferred ‘CL’ for ‘Choose Life,’ ” Cordie said, but “CL” already is used by the state for commercial licenses.

More than 100 organizations, including the Knights of Columbus and alumni of the University of Notre Dame, have specialized license plates in Delaware. The work required of the Department of Motor Vehicles to oversee those plates prompted its director, Jennifer Cohan, to seek the moratorium.

“The cumulative effect of additional specialty plates would place significant strain on the resources of DMV and create adverse impacts on our customers,” she wrote in a letter to legislators.

Choose Life plates drew court challenges in other states from groups that claimed the wording drags the state, through its auto tags, into a political dispute over abortion.

Money raised by the Delaware tags will go to pregnancy counseling centers, Cordie said. About $5,000 has been raised thus far, some of which reimbursed start-up costs for Choose Life Delaware Inc.

The tags are available only to members of Choose Life Delaware, which must inform the DMV if a member goes inactive, Cordie said. The organization charges $20 annual dues, which makes the plate available for a one-time fee of $10 in addition to state registration fees.