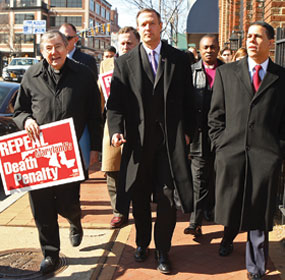 Gov. O’Malley said on Feb. 25 that he is confident a Senate committee that has defeated repeal legislation each of the past two years would send it to the full Senate.

The governor said he has no doubt the bill would win the 24 votes needed for Senate passage and, if necessary, 29 to break a possible filibuster.

Even if the Senate Judicial Proceedings Committee defeats the repeal bill, Senate leaders have said, they’re considering a procedural move to advance the measure to the full Senate.
Senate President Thomas V. Mike Miller hopes for a committee vote, possibly this week, but, even if it defeats the bill, a procedural move could send the measure to the full Senate, said Patrick Murray, Sen. Miller’s deputy chief of staff.

“We want this issue resolved; we don’t want it obstructed,” Gov. O’Malley told about 100 clergy members after an Annapolis prayer breakfast and march against the death penalty. “I think this is the year for repeal.”

The governor said he has talked to senators over the past week or so and that some who had been undecided now favor repeal.

“It is very rare that we address an issue that reaches so deeply into the soul of our state as does this issue of state-sponsored death, state-sponsored executions,” said Gov. O’Malley, who is Catholic. “This is one of the defining moral issues of our time. This issue speaks to who we are as people.”

Gov. O’Malley, like other death penalty opponents, pointed to the findings of a state death penalty commission, which recommended in December that state executions be
banned.

Standing alongside the governor in front of the State House, Bishop Madden called on clergy members to goad their flocks to contact lawmakers and urge repeal.

Mary Ellen Russell, executive director of the Maryland Catholic Conference, attended the prayer breakfast, march and a news conference on the death penalty.

But, she added, Catholics should not grow complacent.

“I can’t say enough how imperative it is for people to make their voices heard” and tell legislators to abolish the death penalty, Ms. Russell said.

Bishop Eugene Taylor Sutton of the Episcopal Diocese of Maryland joined other clergy in criticizing the death penalty.

“Love is doing what is right precisely when it is hard,” Bishop Sutton said. “Jesus taught his disciples to go beyond an eye for an eye and a tooth for a tooth. For that would inevitably lead to what Martin Luther King Jr. and others called an eyeless, toothless society.

“Instead, Jesus just called us to love even the unlovely and stop the cycle of violence. Stop the hate. Stop the killing. Simply stop.”

The bill is believed to have enough support to pass the House of Delegates.