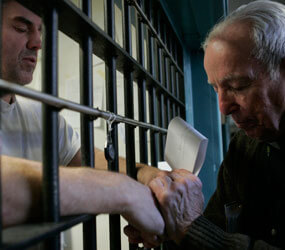 MICHIGAN CITY, Ind. – About 20 death penalty opponents gathered in the bitter cold in Michigan City for a peaceful protest and to pray as the state of Indiana prepared for the first execution in Indiana since 2007.

“This is entirely wrong and it makes me a murderer, too,” said John Souder Roser from nearby Furnessville. “When the state murders somebody, when they perform an execution, it’s me. I am the state and I am not a murderer.”

Roser was part of the protest organized by the Duneland Coalition to Abolish the Death Penalty in the parking lot in front of the prison gates.

Marti Pizzini, the coalition’s education coordinator, stated she stood steadfast in the cold because “the state shouldn’t be allowed to kill someone in the dark of the night without someone noticing.”

Wrinkles was convicted of the 1994 murders of his estranged wife, Debra, her brother, Mark (Tony) Fulkerson, and Fulkerson’s wife, Natalie, in Evansville.

In what was described as a methamphetamine-induced psychosis, Wrinkles, dressed in camouflage, painted his face, cut the phone lines to the house where his wife and two children were staying, and shot all three victims in the presence of his young son, daughter, niece and nephew. In 1995, he was convicted of murder and sentenced to die by execution.

In his last statement before his death, Wrinkles wrote: “Although tonight I pay for my actions with my life, it has been the last 15 years that have been the true punishment. Living with the knowledge of the pain I caused was the severest punishment possible.”

While in prison Wrinkles was baptized a Catholic.

His parents were nonpracticing Catholics and, as a boy, the extent of his experience of faith was limited to an occasional Mass at Christmas or Easter. Through the guidance of clergy and other prison ministers, Wrinkles found himself increasingly drawn to the faith.

“Eric found meaning in the Catholic Church and asked to learn more,” said Bishop Dale J. Melczek of Gary, who had made several visits to the prison to offer Communion, prayer and guidance in recent months. “He became a full-fledged member of the church when he was baptized on death row in 2000 and has done his best to live as a faithful disciple of Jesus from that time.”

Deacon Malcolm Lunsford, also of the Gary Diocese, ministered to Wrinkles for nine of the last 15 years and came to call him a friend.

“At first I worried about him because I never heard him express remorse, but then, about two years ago, he began to say it didn’t have to be this way,” Deacon Lunsford said.

Wrinkles’ conversion is proof that everyone is capable of change, by the grace of God, according to Bishop Melczek. “Eric is a perfect example of how God works in his own time, leading one to repentance and leading one to turn oneself over fully to the Lord.”

In an interview with the Northwest Indiana Catholic, Gary diocesan newspaper, Wrinkles said that with help from others, God made “a huge change” in his life and made him “see how badly drugs had distorted my perceptions of life, love, etc.”

The interview was conducted by correspondence because of limited in-person access by the media in the weeks leading up to his execution.

“Even though I didn’t go out to deliberately kill three people, people who I loved and were family, the fact stands that I did and that has been an insurmountable burden of grief, pain and shame that I can’t seem to ameliorate in my heart,” he said.

“I have made peace with God, but I am not God, and do not think it appropriate that I forgive myself in any way, shape or form,” he said.

Wrinkles was, however, able to make peace with many of his family members, most notably daughter Lindsay and son Seth, now both adults.

Mary Winnecke, the mother of Natalie Fulkerson, has become an anti-death penalty proponent and led a letter-writing campaign to Indiana Gov. Mitch Daniels, asking for clemency. After appeals for his life were exhausted all the way through the Indiana Supreme Court, Eric Wrinkles refused to seek that clemency.

In Evansville, talking to reporters on the eve of the execution, Winnecke asked: “What is the point of continuing anger in your heart forever? You let go and let God, and God gives you peace.”

Debra Wrinkles’ mother, Mae McIntire, has been unable to find peace or closure, according to her own statements.