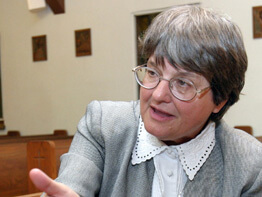 Sister Helen Prejean, C.S.J., a nationally known death penalty abolitionist whose book inspired the movie “Dead Man Walking,” will present two talks about capital punishment next week in the Archdiocese of Baltimore.
Both events, co-sponsored by the Maryland Catholic Conference, will begin at 7 p.m., with Sister Helen speaking at St. Pius X in Rodgers Forge on Sept. 20 and St. John the Evangelist in Frederick on Sept. 21.
Sister Helen, a spiritual advisor to Louisiana death row inmates and author of “Dead Man Walking” and “The Death of Innocents,” will speak about her own ministry to death row inmates and the families of murder victims. She will also address abolitionist efforts in Maryland.
In the last General Assembly, an effort to repeal the death penalty in Maryland and replace it with a sentence of life without parole failed to reach the Senate floor by just one vote. Gov. Martin J. O’Malley and Catholic leaders had lobbied in favor of the anti-death penalty effort.
Richard J. Dowling, executive director of the Maryland Catholic Conference, said the reason Sister Helen is appearing in Baltimore and Frederick Counties is that the two areas “are represented in the General Assembly by elected lawmakers who thus far haven’t seen fit to support abolition of the death penalty or repeal of the death penalty statute.” Mr. Dowling was speaking of Sen. Alex X. Mooney of Frederick County and Sen. James Brochin and Sen. Katherine Klausmeier of Baltimore County.
Invitations have been sent to parishes in and near the districts represented by the three senators, Mr. Dowling said.
Jane Henderson, executive director of Maryland Citizens Against State Executions, said she is optimistic that the death penalty can be repealed in the next legislative session. She sees Sister Helen’s talk as a way of mobilizing citizens in support of that effort.
“I think Sister Helen will help educate the public on why it makes sense to replace the death penalty with life without parole,” said Ms. Henderson, whose organization is the lead sponsor of the talks – both of which are free and open to the public.
For more information, call 301-779-5230.