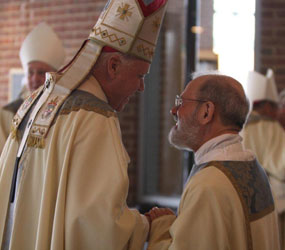 The archbishop shocked many at Deacon Tanghe’s ordination at St. John the Evangelist in Severna Park with the announcement during his ordination homily. Parishioners of St. John began asking one another if they had heard correctly.

Deacon Tanghe, a former Anglican priest of 37 years who became Catholic in the last two years, was caught by surprise, along with archdiocesan officials.

“I had not a clue,” said Deacon Tanghe, 62. “I had no expectations that he was even going to touch it.”

Transitional deacons usually face a longer waiting period before they are ordained priests, but Archbishop O’Brien said he believed Deacon Tanghe was ready for the call because of his deep spirituality and experience in the Anglican church.

Since converting, Deacon Tanghe has spent a pastoral year at St. John and studied at St. Mary’s Seminary and University in Roland Park. During his diaconate, the archbishop said Deacon Tanghe will be entrusted with the Book of the Gospels.

Echoing Pope Benedict XVI, Archbishop O’Brien said “Scriptures should be the soul of your theological formation. For many years as an Anglican and an Anglican priest, you have studied, prayed over and preached that word of God with singular effectiveness, Warren.”

After the archbishop delivered his homily, the solemn ordination began, first with Deacon Tanghe’s promise as an elect, in which he expressed his resolve to carry out his office in accord with the mind of Christ and the church, under the direction of the archbishop and his successors. He also freely accepted celibacy.

Deacon Tanghe then prostrated before the archbishop as the community prayed for him. Those in attendance knelt. A litany of supplication followed.

Then, in a moving, age-old gesture, the archbishop performed the laying on of hands of a kneeling Deacon Tanghe. It signified the conferral of the Holy Spirit, whose power the church ordains those who serve in the diaconate.

The archbishop then completed the ordination by asking God to dedicate the deacon to service at the altar and to God’s people. All responded “Amen” to conclude the prayer.

Newly ordained, Deacon Tanghe was vested by Father James D. Proffitt, pastor of St. John the Evangelist, with the stole and dalmatic, symbols of the deacon’s office. The archbishop then handed the Book of the Gospels to Deacon Tanghe, reminding him of the mission he mentioned in the homily.

Archbishop O’Brien joyfully proclaimed, “We have a new deacon!”

Applause rang out at the parish, as the archbishop extended the greeting of peace to the new deacon. Other deacons welcomed to their brotherhood Deacon Tanghe, who experienced déjà vu.

“It’s an odd feeling because I’ve been ordained a deacon in another ecclesial body and I received clear and rich graces from that,” Deacon Tanghe said. “Today, I have received an incredible confirmation of those graces and a surplus of graces as it were.

“What it’s for is ministry. I knew that I was called to be a deacon and a priest in service of Jesus Christ. When I came to the Catholic Church, I came humbly… asking of the church whether I could come into that ministry I once held in the fullness of the communion of the Catholic Church. God has given me a wonderful, resounding whack over the head ‘Yes!’ ”

Several archdiocesan priests said they believed it was extremely rare for an ordination to take place in a parish community outside of the Cathedral of Mary Our Queen and the Basilica of the National Shrine of the Assumption of the Blessed Virgin Mary.

“He really has become an adopted son of the parish,” Father Proffitt said. “This is not something that happens too often.”

Father Proffitt praised the experienced Deacon Tanghe for his journey to the faith and the clergy.

“You have to admire him for starting over,” Father Proffitt said. “He had no guarantees that when he became Catholic he would be ordained a priest. He’s very humble.”