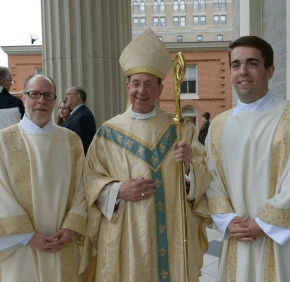 By Paul McMullen
pmcmullen@CatholicReview.org
Twitter: @ReviewMcMullen
Deacon Donald W. Miller once asked one of his five daughters if she was embarrassed that he was not a man of material wealth.
“No,” Mary Pat Kavanagh responded emphatically, “because we all have what’s important, our faith.”
A funeral Mass was offered for Deacon Miller Aug. 13 at St. John in Westminster, his home parish since 2003. The faithful included many members of his family, which includes six children, 32 grandchildren and five great-grandchildren; and at least 10 priests and a dozen deacons, many of whom held him in the same affection.
“I’ve never seen his equal, an amazing man with a golden humility,” said Father Michael J. Roach, pastor of St. Bartholomew in Manchester, who gave the homily. “He wrote the book on what it means to be a deacon. He was anxious to serve God’s people without any self-interest.”
Deacon Miller died Aug. 10 at age 80, at Carroll Hospice’s Dove House. Since November 2007 he had battled prostate and bone cancer, which friends and family say did not deter him from his health care ministry.
“He was a man of extraordinary compassion, particularly blessed with the ability to minister to sick people,” said Monsignor James P. Farmer, pastor of St. John from 2010 until July, when he moved to St. Thomas More in Baltimore.
“When I got to St. John,” Monsignor Farmer said, “they told me had six months to live. He had cancer, but cancer did not have him. It not define his life. I visited him a couple of days before he died. I prayed with him, and blessed him, then he said, ‘Let me give you my blessing.’ He could hardly talk or move. I have never felt so humbled.”

When he died Aug. 10, Deacon Donald W. Miller was the grandfather of 32 and great-grandfather of five. Many of them gathered on the altar of St. John in Westminster July 4, 2015, after he assisted in the wedding of granddaughter Morgan Kavanagh to Tim Beer. Deacon Miller’s wife of 53 years, Mary Patricia, is in the front row, left of the bride. (Courtesy Mary Pat Kavanagh)
In Westminster, Monsignor Farmer had succeeded the since-deceased Monsignor Arthur F. Valenzano. As pastor of St. William of York in Baltimore, Monsignor Valenzano had inspired Deacon Miller to enter the diaconate, to which he was ordained in 1992.
In addition to ministering to the sick, his legacy includes instituting a Friday communion service at the Baltimore County Detention Center in Towson.
“He was one of the founding members of that ministry, in the mid-1990s,” said Deacon Kevin Reid, the archdiocesan Office of Clergy Personnel liaison to the deacon community. “Three of us are doing that now, and he was the guy who got us involved.”
Deacon Miller was born in Baltimore, and attended the parish school at Our Lady of Pompeii in Highlandtown, before graduating from Baltimore Polytechnic Institute. He served four years in the U.S. Army, and was married for 53 years to Mary Patricia Miller.
They met at a Young Christian Workers event. He was also a member of Opus Dei.
They raised six children in a rowhome near St. William of York, according to Kavanagh, the oldest. A son, Michael, went to Mount St. Joseph High School. Four daughters went to Archbishop Keough High School, another to Mount de Sales Academy.
Donna Hofmeister, the third-oldest, is the mother of 10. Kavanagh has raised seven children, and adopted a nephew after their youngest sister, Terri, died at age 39. His other daughters are Laura Jackson, a mother of six, and Julie Benedictis, a mother of four.
“Growing up we didn’t see a lot of my Dad, because he always worked three jobs to make ends meet,” said Kavanagh, who noted that after her father lost one job as an environmental engineer, he trained his younger replacement.
Deacon Miller worked in maintenance at St. Louis Parish in Clarksville, while continuing to minister as a deacon. He was a member of Knights of Columbus Council No. 1393, at St. John in Westminster.
“He lived every day for Our Lord,” Kavanagh said.
Memorial contributions may be made to Carroll Hospice House, 292 Stoner Ave., Westminster MD 21157.